Student Profile: Jennifer Urbina
A journey that started in the lab

Second-year student Jennifer Urbina is the eldest of eight children, six girls and two boys. She has an early memory of her brother being sick with a high fever and remembers wanting to take care of him. But even then, she never thought about becoming a nurse or a doctor. She says a healthcare career was an evolution for her, but she had always liked the sciences.

“I always knew I wanted to go to college, but with such a large family, I couldn’t imagine how I would pay for it. My solution was to join the military,” says Jennifer.

After graduating from high school near Los Angeles, California, Jennifer enlisted in the Navy. Following several successful years in the military, where she also met her husband, James Duggan, they settled in the Phoenix area in Arizona. And since her interest in the sciences was still with her, she enrolled at Arizona State University, eventually earning her degree in clinical laboratory sciences. Upon graduation, she worked in several hospital departments such as the blood bank and chemistry lab.

“I loved the lab aspect of medicine,” says Jennifer. “I loved the process, knowing that once blood was drawn and processed, it could take several paths, from microbiology to hematology to the blood bank. But while I had been working with patient blood samples, I began wanting to work more directly with patients at a diagnostic level,” she says. 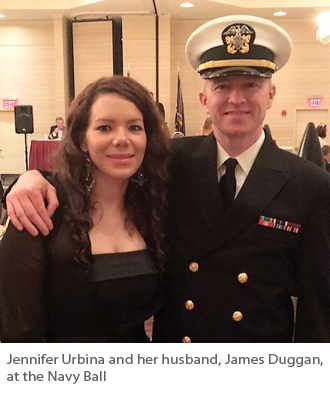 Following seven years in Arizona, Jennifer and her husband moved to Albuquerque, New Mexico. Now in the Navy Reserves, James is coincidentally an air ambulance pilot. Even though he transports patients from remote reservations and rural areas to specialist appointments and hospitals with higher levels of care, unlike Jennifer, he has no health care background.

There in New Mexico, Jennifer’s interest in one-on-one patient care continued to grow.

From the labs to the bedside

“I realized that I did blood work to help diagnose patients, but I really wanted to work directly with them and be more involved in their care and treatment, not just their diagnosis.”

She decided to take the physician assistant route, earning her degree from the University of Saint Francis in Albuquerque. During her five years as a PA, Jennifer spent two of those as a primary care provider in the Veterans Administration (VA) Health System, experience that prepared her for the next step in her career.

“Medical school wasn’t really on my radar until I was a PA. That path showed itself to me slowly as I became ready to expand my responsibilities and work with more autonomy,” says Jennifer, who admits that she first heard of OUM a couple of years before she applied, but initially put it on the back burner and went “back to PA world.”

When she began revisiting the idea of medical school, she looked into traditional medical school in New Mexico and a PA-to-DO program in Connecticut, but she was not ready for a cross-country move or to completely do away with her current life. Remembering OUM, she attended a Meet the Student webinar.

“That’s when I realized that there was a pathway for me. Here was someone who had actually done it and that got me excited,” Jennifer says.

The speaker at the webinar was Orla Weinhold, MD, just prior to her graduation in OUM’s Class of 2014. Jennifer later had the opportunity to meet Dr. Weinhold at her new student orientation in early 2016.

“Hearing from other students ahead of me in the timeline really helped my husband and I make my decision,” she says. “My husband is great. He’s my rock and he always says ‘we’re doing this as a team.’”

Advisors and other resources

Jennifer was fortunate that her laboratory background gave her a foundation in the basic sciences, but she clarifies that “medical school is medical school.”

“I think my background has helped me somewhat, but there is also so much new information. The subject matter is taken to a deeper level, with more detail, depth, and breadth than any level I may have learned before,” she says, which is why Jennifer has taken advantage of resources OUM offers to support students in their journey, such as the Structured Study Protocol and an academic advisor.

“Yes, I meet with my advisor once a week during each term. I wasn’t consistent originally, but once I started, I felt it really helped. My advisor guides me on where I need to study more and she motivates me to stay on track by keeping me accountable. I would highly recommend setting up time to meet with your advisor.” 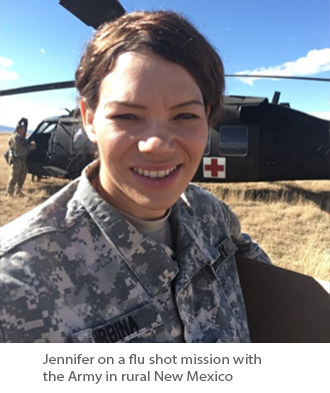 Like many of her fellow students, Jennifer made adjustments to accommodate medical school. She no longer works full-time in primary care at the VA, but now covers shifts when she can for a provider who has been re-deployed back into active service. She also fills in, when needed, at a reproductive endocrinology practice assisting with ultrasounds. For a while, she covered shifts at CVS Pharmacy Minute Clinics, but she now considers herself a full-time medical student.

In addition, Jennifer is a member of the New Mexico Army National Guard. Though loyal to her service in the Navy, she joined the Army National Guard when she was a PA to take advantage of its Health Care Loan Repayment program. As a reservist, she spends one weekend on duty each month, training to keep skills sharp, and spends an additional two weeks annually in advanced training. She was recently on active duty when she completed Continuing Medical Education requirements.

Puppies on the side

Despite their busy schedules, Jennifer and her husband have gotten involved in fostering animals from a local shelter.

“We take care of them for a few weeks so they aren’t stuck in cages while they’re waiting to be adopted,” she says. “Right now we have a few puppies and this is the tenth or eleventh time we’ve fostered.”

They started fostering with the shelter after their 16-year-old dog died a couple of years ago.

“We knew we weren’t ready to get another dog right away, but six or eight months after she died, we started fostering. We recently had a mom and her puppies. Luckily, all of the animals we have fostered so far have been adopted,” she says.

As Jennifer gets closer to clinical rotations, she would like to stay local. She’s hoping that, between the work she has done and continues to do part-time at the VA and her contacts at the University of New Mexico, she has set those possibilities in motion. Fingers crossed.