A record 44 new students entered OUM in late July following an online orientation session for students from Australasia and a two-day event in Chicago for North American students.

“It is always so gratifying to welcome our new students and to learn of their journeys that brought them to OUM,” says Taffy Gould, OUM’s Founder and Chairman of the OUM Council, who was on hand at both events.

Of the students attending the online orientation, 22 were from Australia, four from New Zealand, and one from Samoa. Attending the live session were 16 Americans and one Canadian.

Nursing was the most represented profession in the starting class with six RNs and five nurse practitioners. Five new students came from a business or legal background with an additional five in healthcare technology. Other health professions include physician assistants (4), pharmacists (4), paramedics (3), social workers, and mental health counselors, as well as a dentist, podiatrist, and physiotherapist. Other professions include military and law enforcement.

The previous record for an entering class was 42, set in 2015. OUM’s total enrollment now tops more than 250 students in 12 countries.

In addition to getting an update on the clinical curriculum and resources available to help students prepare for USMLE, the group received a tour of the hospital and perspectives of medical students currently rotating there.

Incoming students were also treated to a panel discussion with current students and a graduate who shared their OUM experiences and provided tips for surviving and thriving in medical school.

In a discussion about support systems and family interactions, third-year student Lisa Cornforth paid a tribute to her husband who has been there for her at every step.

“Don has been my rock through this whole thing,” she said, fighting back tears. “If it were not for him and all of our family, I would not be here today.” 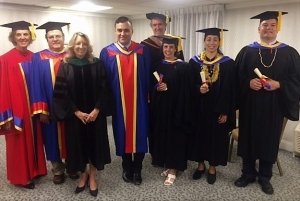 Though Dr. Sheila Maurer graduated and entered her Psychiatry residency in 2012, she did not formally participate in a graduation ceremony.  Her family was on hand to watch the pomp and circumstance.

Dr. Dean Davis’s family made the drive to Chicago from their home in southern Illinois, where he began his residency in Family Medicine in early July.

Dr. Wendy Chen, who started her Internal Medicine residency in Chicago in July and whose family honored her at a ceremony last year in Miami, also marched with her colleagues.

Also in attendance at the graduation ceremony and reception was Dr. Patricia Graham (Class of 2008) who is a practicing internist and now on the faculty at Rush University Medical College in Chicago.