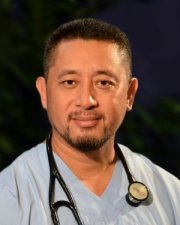 Toleafoa Viali Lameko, MBBS, MIPH, PhD CandidateVice Chancellor
Dr. Lameko leads his efforts to expand OUM’s presence in Samoa and the South Pacific region, including increasing opportunities for clinical clerkships. Dr. Lameko, who has served as OUM’s Director of Clinical Studies and Associate Professor, most recently served as Director of the Clinical Program and Senior Lecturer for the Faculty of Medicine at the National University of Samoa (NUS).

Dr. Lameko has served as advisor to both the Western Pacific branch of the World Health Organization and the Secretariat of the Pacific Community on a number of health related issues prevalent in the region. He is also a recipient of the Commonwealth Leadership Conference, Pacific Island Future Leadership Tour, and the Pacific Forum Greg Urwin Pacific Leadership Award. In Samoa, Dr. Lameko holds his High Chief Title of Toleafoa from the village of Fasito’otai and Oratory Chief Title of Manu-Falealili, from the village of Sapunaoa in the District of Falealili.

In addition to earning a Bachelor of Science from the University of Auckland (New Zealand) in 1993, Bachelor of Medicine Bachelor of Surgery (MBBS) from Fiji School of Medicine in 1999, and a Master of International Public Health from the University of Sydney (Australia) in 2008, Dr. Lameko is pursuing his PhD from Walden University in the United States. His dissertation title appropriately is “Cultural Influences on Dietary Behavior among Samoan Adults.” Dr. Lameko is committed to conducting research at OUM that improves the health of people in Samoa and in other countries where the University’s faculty and students live.