Support makes all the difference

Second-year medical student Amber Hume is a physical therapist from Canada. She lives in Delta, British Columbia, a suburb of Vancouver. Before enrolling at Oceania University of Medicine, Amber operated her own successful physical and sports therapy practice, treating athletes in sports ranging from soccer and rugby to volleyball, basketball, and yes, ice hockey, the national sport of Canada. She earned a BS from Trinity Western University and an Advanced Graduate Certificate in Athletic Therapy from Mount Royal University, both Canadian institutions.

So why medical school? 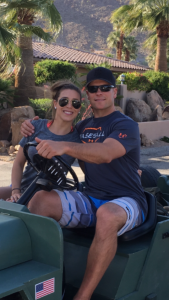 “I had hit a professional barrier,” says Amber. “I was spending a lot of time referring patients to doctors for things which were outside my scope of practice,” which she acknowledges isn’t necessarily unusual for an allied health professional.

She decided to pursue the Master’s/PhD route, enrolling in an Aviation and Occupational Medicine Master’s program with an online curriculum. The program uses the same learning platform as OUM – Moodle – and a virtual classroom system very similar to the one used by OUM – Blackboard Collaborate. Amber is about half way through the program, but since it was designed for doctors, she won’t be able to finish and earn her degree until she graduates from OUM with her MD.

“In doing my due diligence before I started the aviation medicine program, and once I began, I realized that an online program was an effective and efficient way to learn,” says Amber. “While researching, I found a 2010 study out of Stanford University that said 70 percent of first- and second-year medical students don’t attend live lectures, opting to listen to recordings at home. So, I started thinking: If this aviation medicine program advocates online learning, could there also be a medical school with an online program?”

She spent some time on Google and found OUM.

Once Amber found this distance-learning medical school, she needed to find out if an online curriculum would be accepted in Canada. Would being an OUM graduate allow her to practice in her hometown?

“I needed to know what my pathway to practice would look like as an international medical graduate (IMG) with a degree from a non-traditional medical school. First, I had to make sure that OUM was accepted in my province.” British Columbia does accept applications for licensure and residency from OUM graduates who earn high scores on their qualifying exams, she found.

A sense of community

“I am actually quite an introvert,” says Amber. “I thought I’d be able to sit in my office or at the dining room table with my computer and study on my own. But I have found my OUM experience to be quite the opposite. I routinely find myself on Skype study calls with students in Japan, Australia, and several states in the US, even one on a military base in South Korea.”

OUM’s Academic Advising program is a great resource, says Amber. She points out that she has attended five universities in three countries over a ten-year period and says that none of them come close to providing the support OUM students receive from their Academic Advisors.

“They make sure you are on the right track. Some students call their time with their advisor their ‘therapy session.’ I look forward to our call every week.”

Amber says that the weekly contact with her Academic Advisor is one of the reasons she feels such a part of the medical school. She also recommends that students who are able should try to attend one of OUM’s Student Conferences, held annually in Melbourne, Australia and every other year in the US. In July, she attended the Student Conference held in Houston, Texas, US, where she was able to meet fellow students, graduates, and faculty, and tour hospitals where OUM students can complete clinical rotations.

“I’m so glad I went. I say that I liked OUM before the conference. Now I love OUM! Even though I’ve been in class with some of those students and have been talking to them for two years, this was the first time we met in person,” says Amber. “It was nice to shake someone’s hand for the first time, yet you felt like you already knew them.”

In addition to the support of one’s fellow students, those who have the most success during medical school have a strong support system at home. Amber feels fortunate to be one of those students. Her three sisters and her parents are very supportive of her journey, as is her husband, Brad Miller, who works as a powerline engineer.

She and Brad have been committed to making sure they keep some of their favorite activities intact, despite their hectic schedules.

“Every week we pick one night to order takeout or make a new recipe, play gin rummy, and watch a movie. So far, I have only ever beaten my husband once at gin rummy. He says my strategy is wrong. I’m working on it,” she says.

Amber also cannot do without her workouts, which she used to be able to do only at night. Since becoming an OUM student, she has trained herself to work out in the mornings in her home gym. On weekend mornings, before Amber starts her busiest study time of the week, she and Brad make sure to go for a walk or a drive to the coffee shop.

“Probably the only reason I can manage medical school is because of my husband’s support,” says Amber. “On top of the emotional and financial support, he has picked up all the slack around the house. I say we don’t have children yet, but I know I’m a child to him. I study and make messes in the office. I study and make messes in the kitchen, then migrate them to the dining room. He’s very understanding.”