PROUD TO BE UNCONVENTIONAL

First-year OUM student Caroline McNeal says she has always forged her own path. Her “out of the box” thinking probably began while growing up as a military kid. She and her family lived in Japan, Okinawa, and throughout the US. She has been doing contract work for 20 years as a travel Clinical Laboratory Scientist, managing and processing lab testing in hospitals throughout the US. Caroline turned 51 during her first class in medical school – though that isn’t out of the ordinary at OUM. 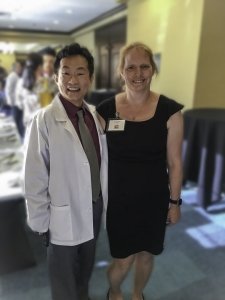 “No one has ever been able to keep me in a box,” she says. “I’ve always been running around in a corner nowhere near it.” But she has always been near science.

After graduating with her Biology degree from Mansfield University in Pennsylvania (US), she spent six years as an environmental microbiologist. When a senior level job in France was offered – and her then husband said they couldn’t go – a friend suggested Caroline join her in a hospital lab. She proudly continues that work today, in light of the ongoing shortage of lab scientists and long before the current pandemic brought lab testing to the 24-hour news cycle.

“In some ways, that’s why becoming a physician was a natural step for me. I may not be seeing patients, but I have always processed and analyzed their blood and data,” says Caroline. “For decades, I’ve been helping doctors diagnose their patients and even decide when to discharge them.”

Caroline just completed a three-month contract at a hospital in Connecticut where her husband was also contracted as a phlebotomist. “Yes, he brings me the blood that I analyze,” she says. During the past year, they also spent eight months in California and three months in Reno, Nevada. They very recently traveled, with their two dogs and four cats, back to Montana – which they call home –  to pick up their RV and return to California for the next contract.

“My first placement in Montana was before I met my husband. Agencies that set up your contracts, also provide housing. That first time in Montana, I was housed in an apartment above a bar. I became friends with the bartenders and customers and told them ‘I’m going to start making crock pot dinners for us because I don’t want to eat alone,” Caroline says. She never ate alone after that. That was when she began to love Montana and life in a small town.

She and her husband now have a home in Deer Lodge, Montana, a town of about 3,100 people.

“It doesn’t matter what direction we’re coming from, as soon as we cross the state line into Montana, my stress level immediately drops,” says Caroline, adding that they look forward to again seeing bald eagles, antelope, and an occasional bull moose walking down the street.

Happy to call themselves Montanans, she says the lifestyle also lends itself to their hobbies. Even with work and 40-50 hours of study each week, Caroline and her husband won’t compromise on spending time together. In addition to cooking and baking together, and walking the dogs, they are both hunters.

“Even if it is for a half hour, we take our compound bows out for some target practice. It’s part of our time spent together,” she says.

Montana is also likely to play a big role for them after Caroline graduates from medical school.

“Right now, our plan is to go back to Deer Lodge and set up a private practice, but with an old-school twist. We plan to do home visits for the elderly, especially during the winter months, so they don’t end up with a broken hip from the ice and snow. We will also visit families that have several sick children so we could hopefully keep the sickness in one house and not spread into the community,” she says. “We know we have a lot of support from our community to do this. We’ve also discussed splitting our time between Montana and Belize. My husband has also said ‘What about Montana and Ireland?’”

But first they look forward to the required clinical rotation in Samoa.

“My husband gets to spend four weeks fishing in Samoa and he’s very excited about that. We’re looking forward to the adventure,” she says, adding that they may consider her required rotation in American Samoa where she now has fellow classmates who have become friends.

Last July, Caroline’s orientation class created an enviable WhatsApp group. Since then, these first-year students have connected with each other in an unprecedented way.

“The group has become a lifeline for many of us, seeing each other through exams, family tragedies, work stress, illness, and our weekly Saturday quizzes,” says Caroline, noting that members of the group are from throughout the US, Australia, and American Samoa. “We feel that we have the full effect of being a class. We chat with each other non-stop. We’re all under the same stress because we’re all trying to work, go to school, and keep our family lives going. It’s a lot to juggle but we’re finding a way to do it because we’re all connected to each other.”

But while their group dynamic may be unique, dealing with time constraints and gaining self-awareness are common and good skills to cultivate. In addition to confirming that she does not like pharmacology, Caroline has realized she can learn a great deal of information at a much faster rate than she could have imagined.

“You almost have to be an adrenaline junkie to deal with the intensity of the program. It’s not an easy path,” she says, also noting the time needed to master material outside of the classroom in self-study.

Making the most of resources

That’s likely why Caroline takes advantage of almost every extracurricular activity and study support opportunity. In addition to Case of the Week, Journal Club, and Research Club, Caroline participates in Structured Study Protocol alongside her pre-clinical courses in order to provide herself with more assurance of USMLE readiness when the time comes.

“All of these add to the education and give you more avenues to interact with more classmates and with students who may be further along in the program. With Journal Club, you learn how to present. With Research Club you get ideas for your own project and you learn what Dr. Brown and Dr. Cunningham are looking for and how to get organized for your research. They all just give you more exposure.”

When she was much younger, Caroline had wanted to be a veterinarian. “Over the years, I was accepted into two vet schools, one on each coast. Both times, my mom told me I wasn’t smart enough and sadly, I believed her.” Shortly before her acceptance to OUM, she had also considered becoming a nurse practitioner.

“I was looking at non-traditional schools. My work doesn’t lend itself well to brick-and-mortar schools. I stumbled onto OUM during online research and the more I looked into it, I felt it was the exact right school for me. It was the right choice,” says Caroline. “My only regret is not doing it sooner. It’s hard but has been so much fun. I’ve met great people and I wouldn’t change it for anything.”