Twenty-eight new students entered OUM in February following a new pre-orientation session and a two-day event in Houston for North American students and a comprehensive online session for Australasian students. 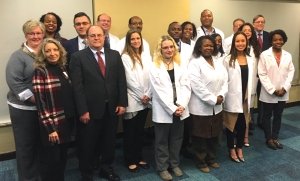 Of the students attending the online orientation, ten were from Australia, one from New Zealand, and three from Samoa. All 14 attending the on-site session were Americans.

Nursing was the most represented profession in the starting class with four RNs and seven nurse practitioners. Six new students came from a business or government background. Other health professions include pharmacists (4) and paramedics (2), as well as a caregiver, chiropractor, naturopathic physician, psychologist, and neurophysiology technologist.