With the need to preserve exam integrity and security, the OUM administration is exploring narrowing the windows in which students may take their final exams in order to ensure that OUM is in line with accreditation standards and consistent with standard medical resources.

The window in which OUM’s e-Foundation students may take their final exams is 68 hours, and the current window for students enrolled in the system-based modules is 12 days, which includes SBM week seven (review week) until the end of the following week.

“Excessively wide windows invite question and answer sharing by students, and we need to address it,” says Randell Brown, Deputy Vice Chancellor. “And of course, we understand the diverse needs of our students and the desire to maintain some flexibility.”

Data extracted from Proctortrack shows that 60 to 80 percent of exams are taken during the last four hours of the exam window. Therefore, it would follow that one exam window would be that last four hours, generally Mondays from 2:00 to 6:00 pm ET in North America and Tuesdays from 6:00 to 10:00 am in Sydney, though the times may vary depending upon Daylight Saving Time in various countries.

In early March 2019, a survey was sent to students asking for their assistance in identifying a second exam window, as well as their input into issues they may have with the exam windows.  One limitation in identifying the proposed windows was to use times during waking hours for OUM students in North American and Australasian time zones.

The survey ran from 2 March and closed on 22 March. A total of 137 students, or 60 percent of the student body, responded to the survey. A geographic breakdown of the response follows:

Responses were generally proportional to OUM enrollment, with a little less participation by Australians and Canadians and more by Americans and Samoans.

Five four-hour time blocks during that last weekend of the term were identified as likely times that most students in North America and Australasia would be awake. Students were asked to state their first, second and third choices, with 10 points going to the first choice, seven to the second choice, and four to the third choice. A summary of the findings follows on the next chart. 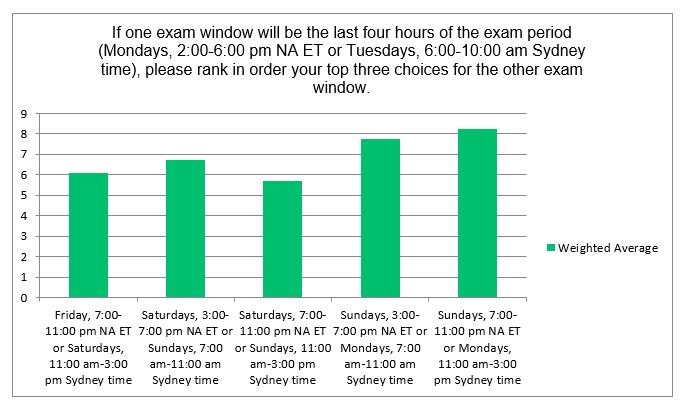 While the bar graphs (above) show little distinction among the choices, the table (below) enumerating first, second, and third choices, shows that the clear choice is the last one, Sundays, 7:00-11:00 pm NA ET or Mondays, 11:00 am-3:00 pm Sydney time, which is the first choice by 61 percent of the respondents.

However, the students’ 82 written responses revealed that there is much more to this situation and its resolution. Many students cited work schedules and preferences to take the exam outside of the stated alternatives in the survey.

“So now we’re going back to the drawing board,” says Chris Dudley, Deputy Vice Chancellor for Administration & Student Affairs. “The Chancellery and faculty committees are looking at broadening the exam windows to 48 hours and offering a means of signing up in advance to arrange an earlier exam window, which would be offered under tighter surveillance.”

The final proposal will be vetted by the Steering Committee, a group of OUM’s academic and administrative leaders, and must be approved by the Academic Board, which features some of those same University leaders along with student and alumni representatives. The OUM Council, the University’s governing body, must ratify all policy changes.

“We will also request comment from OUMSA,” says Dudley. “It is important that we get input from across the University.”

A separate issue that the faculty and University administration are tackling is exam extension requests. While there is a special consideration process for students with medical and personal emergencies as well as technical issues, the number of students simply requesting to take their exam at a later time beyond the current exam windows is increasing.

“It’s just not fair to the vast majority of our students who study hard and prepare for their exams that some of their classmates chronically request extra time,” says Dr. Brown. “Of course, emergencies come up, but we need to ensure that students who are less prepared get the assistance they need to get them up to speed.”

A committee of faculty and administrative leaders is developing a protocol that students requesting extensions would follow, which would include a limit on extensions, required intervention by the academic advisor, and other features.

“This policy will go through the same process as the exam windows—approval by the Steering Committee, Academic Board, and OUM Council—with input from OUMSA,” says Dudley.

While OUM’s leadership reviews policies on an ongoing basis, as the University prepares for PAASCU accreditation in 2020, there is particular emphasis on ensuring that its policies and procedures are comparable to those of traditional medical schools. The current review of OUM’s examination policies is one example.

In addition, PAASCU and OUM must comply with standards and policies of the World Federation of Medical Education in order to meet the requirements of the Education Commission for Foreign Medical Graduates, which among other things determines graduates’ eligibility to practice in the United States.

Certain medical education resources, such as use of examinations by the National Board of Medical Examiners, require strict examination security policy and enforcement, as those organizations must ensure the security of their exams and intellectual property. In order to use these resources, OUM would need to prove that it strictly enforces its exam integrity and security regulations.