Neuroscientist to many, “snake guy” to others

His neuroscientist colleagues call him ‘the snake guy.’ His herpetologist friends (as in the study of reptiles and amphibians) introduce him as a neuroscientist.

“As a kid, I was fascinated with reptiles and especially loved snakes,” says David Holtzman, PhD, OUM Academic Advisor. 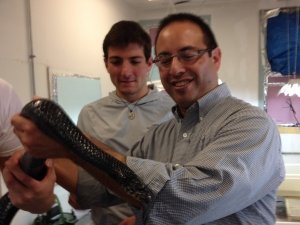 Dr. Holtzman holding a legless lizard at the Buffalo Zoo in New York.

Dr. Holtzman also teaches both the Neuroscience and the Hemic-Immune System-Based Modules at OUM. He earned his BS in Biology with a concentration in Anatomy and Physiology from Cornell University and his PhD in Neural and Behavioral Sciences from the State University of New York Downstate Medical Center. He has been on the faculty and/or conducted research at Rockefeller University, Oberlin College, and the University of Rochester, among other institutions.

And that research into sensory system development, comparative neuroanatomy, spatial learning, and  memory has largely been conducted studying snakes.

His father, a fish endocrinologist, was a bit older when he started graduate school, so Dr. Holtzman was in his lab a lot when he was growing up. He was always very interested in what his dad’s reptile colleagues were working on and one of those researchers ended up on his thesis committee years later.

As an undergraduate biology student at Cornell, he knew he would study snakes but had expected it to be from an ecology/evolution standpoint. It was during his senior year that he changed direction to neuroscience but still studying snakes.

“Their brains and nervous systems never stop growing, even as adults, which I find fascinating,” says Dr. Holtzman. “I wanted to combine my interest in animal behavior with neural development.” The researcher with whom he wanted to study during graduate school happened to be at a medical school, so in a number of classes, he studied side-by-side with medical students.

“PhD students and medical students are quite different,” he says, “but it turned out to be a good fit, the right fit.”

As a post-doctoral researcher at Rockefeller University in New York City, he veered a bit from snakes to look more into electrophysiology and endocrinology, the interaction and effect of steroid therapy on pain in spinal cord-injured rats. Dr. Holtzman feels fortunate “to have been exposed to the great minds” with whom he worked at Rockefeller, a university with which 32 Nobel Laureates have been affiliated, he proudly shares.

“My oldest daughter was born when I was in graduate school. I’ll never forget that one year when we were trick-or-treating for Halloween, at one of our apartment stops she got candy from three Nobel laureates,” he says with a chuckle.

At that time, his wife–also a neuroscientist–was teaching at Queens College in NYC, but she wanted to go to medical school. They ended up in Ohio, she at Case Western University’s medical school and he on the Oberlin College faculty. Fast forward a few years to his wife’s residency match in Rochester, New York, where Dr. Holtzman joined the University of Rochester faculty. There, he did notable published research regarding animal behavior, specifically memory and learning in corn snakes.

Colleagues – then and now

Several years ago, when he was looking into the possibility of one day retiring to the Caribbean, Dr. Holtzman met the fellow faculty member who would eventually introduce him to OUM.  He was hired by the Xavier University School of Medicine in Aruba where he became friends with Ramanan Balasubramanium, MD. “Dr. Bala,” who is also an OUM Academic Advisor, eventually joined the OUM faculty and referred Dr. Holtzman.

Dr. Holtzman says he is impressed with how the University has evolved just in the four years he has been with OUM.

“At faculty meetings, there is an excitement and constant drive to make the curriculum and student experience better,” he says. “You don’t find that commitment at all medical schools.” 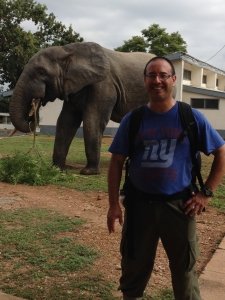 Dr. Holtzman during an undergraduate class to Ghana from the State University of New York at Geneseo looking at health issues related to environmental challenges.

As someone who had been teaching for over 25 years and enjoyed being in front of a classroom, Dr. Holtzman says OUM’s online course delivery took some getting used to.

“While I’ve come to enjoy the format, at first I felt like something was missing. It took me a while to identify what that was,” he says. “I eventually realized how much I had relied on reading facial expressions and body language to gauge if students were grasping material. You just have to change your techniques a bit.”

Having the ability to do something differently and get to the same end is what Dr. Holtzman thinks attracts students to OUM. He says students no longer need to be pigeon-holed into thinking there is only one way to study medicine, one that requires giving up every aspect of your life to follow a traditional path.

“I think you can always find a way to do what you love,” he says. “And OUM students have found that you don’t have to do A-B-C; you can also do Q-R-S.” But there will still be challenges, he adds.

The biggest student challenge, he observes, is time management. He tells his advisees that the program takes planning, discipline, and the need to be self-aware of the end goal.

“Despite OUM’s non-traditional hours and the flexibility and accommodation they provide, there are still many more hours needed,” he says, to be successful.

Dr. Holtzman also relates to the juggling required to balance family and studies. He always knew he would be an academic like his father. He liked how he was able to be home quite a bit and always made his family the number one priority. Essentially, he wanted his daughters to grow up the way he had.

Some OUM students say regular exercise or “date night” are non-negotiable in their quest for balance. For Dr. Holtzman, that one day each week for his daughters: non-negotiable.