A passionate Pathologist, her first love is teaching

“I always wanted to be an engineer, just like my father. He was my superhero,” says Dr. Sudha Shivaraj, Pathologist and OUM Clinical Rotation instructor, Academic Advisor, and Mini-Case Facilitator. “But he wanted me to be a doctor. I loved him so much that I wanted to fulfill his wish,” she says.

Dr. Shivaraj lives in Bangalore, one of India’s major cities, where she was also born and raised. After her Year 12, she applied to medical school and secured a place on the first attempt. That was no small feat, and India’s tough competition for medical school seats remains true today.

It was during her MBBS studies that Dr. Shivaraj became passionate about Pathology. 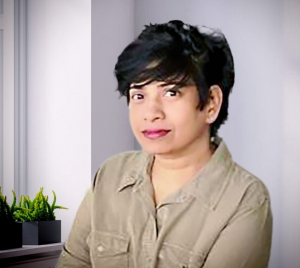 “I was the class topper and fascinated by Pathology from day one,” says Dr. Shivaraj. “I am an extrovert and always loved interacting with patients, but once I completed my undergraduate degree in Medicine, I knew I was meant to be a Pathologist.”

“The Mother of Medicine”

“During their first year, medical students learn the basic sciences and how the body works,” says Dr. Shivaraj. “Then, in the second year, Pathology starts introducing them to abnormalities. They begin to learn how to diagnose and manage disease. I think Pathology is the first step in the battlefield of conquering disease,” she says with much enthusiasm — and perhaps a little bias. She calls Pathology “The Mother of Medicine.”

While Dr. Shivaraj says she is passionate about Pathology, she also clarifies that teaching is her “first love.” During her post-graduate studies at Kasturba Medical College in Mangalore, India, she was appointed as a Pathology tutor and began teaching undergraduate medical and dental students.

After completing her graduate work, Dr. Shivaraj was Pathologist and Laboratory in Charge at Bangalore Baptist Hospital. She was also on the faculty at International Medical School in Bangalore from 2014-2021, most recently as Assistant Professor.

Dr. Shivaraj has one sibling, a sister who is also a physician, a GP in Melbourne, Australia. “I dedicate my achievements and success to my sister, Suma. Thank you, ‘Su,’ for making me what I am today,” she adds. In 2017, it was her sister who introduced her to OUM, as a nurse in her practice had heard about the University from a friend.

Very curious about OUM, Dr. Shivaraj wrote to Dr. Meshach Kirubakaran, then OUM’s Dean for Australia, who was very well connected back in India. After a phone interview with him, he referred her to OUM Faculty Affairs and, following another interview, she was offered an Academic Advisor position, also becoming a Mini-Case Facilitator one year later. As the pandemic began interrupting clinical rotations globally in 2020, Dr. Shivaraj was very pleased to co-create and co-teach OUM’s Pathology elective, and she was recently appointed one of the University’s six full-time Academic Advisors.

“My initial reaction to OUM was ‘How can anyone teach or learn medicine online, especially Pathology?’ But once I learned more about the program and began advising students, I realized how well they were learning the material. That is because OUM students are different. They are mature, focused, and passionate about their studies and becoming doctors. They are committed and have a thirst for knowledge,” she says.

Dr. Shivaraj says she always thought the curriculum was well organized. She loves the weekly quizzes, how they help students keep up-to-date, and is a “big fan” of the mini-case sessions during the System-Based Modules. She also applauds the one-on-one interaction the faculty has with students as Academic Advisors.

“The Introduction to Medicine, which started earlier this year, is a great thing for students. It provides a good foundation, helps them adapt to online learning, and gives them the chance to become familiar with OUM’s learning and assessments,” she says.

“I went to visit my sister in Australia and a friend asked me ‘What will you do when your sister is at work?’ Then she said, ‘You should write.’ I did. I became addicted,” she says.

Dr. Shivaraj has been the main author of Essentials of General Pathology, published by Wiley Publishing, India (2014) and of Pathology in a Nutshell to be published soon by Jain Publishers, India. 1000 MCQs in Pathology has also been accepted for publication by Theima Publishers, United States, for their online platform (pending formal approval). In 2017, Dr. Shivaraj co-authored Practical Medicolegal Manual for Clinical and Forensic Practitioners (Medical Ethics, Clinical Forensics, and Toxicology) edited by VV Pillay with contributions from India’s leading forensic/toxicologic professionals. She has also published several journal articles regarding medical education and is a regular contributor of the MCQs which accompany articles in the StatPearls medical education library.

“I have reached the point where my day is incomplete unless I pen at least a few lines,” she says.

Dr. Shivaraj says she is happy to be part of the OUM family.

“I am committed to my students and have developed supportive relationships with some of my colleagues, which is invaluable. I find it easy to communicate and establish rapport with our students. And their good reviews fuel my enthusiasm.”