FOR THE LOVE OF LEARNING

There was always another discipline to conquer

Like many of his OUM faculty colleagues, Dr. Degu Abebe, Academic and Research Advisor, has multiple degrees — a Bachelor’s degree in Nursing, Master’s degree in Biotechnology, PhD in Neuroscience and Physiology, and his MD last year. Dr. Abebe, who is preparing to take the AMC Exam in the next few months, actually began his academic journey with a degree in Veterinary Medicine in the late 1990s from Addis Ababa University in his native Ethiopia. So, why a veterinarian? 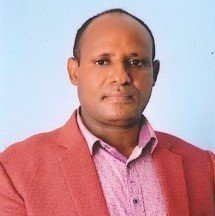 “Growing up in Ethiopia, my father had cows. A lot of them,” says Dr. Abebe. “When they would get sick, he often found meds and treated them himself, as there were not many veterinarians and he didn’t always have access. One day he said to me and my siblings ‘I wish one of you could study to be a vet.’ I have four brothers and two sisters. I knew how important it was to him.”

He admits to being a humanitarian, one who sympathizes with those who suffer and are less fortunate, whether animals or humans. “I may have started as a vet, but I always knew that medicine would be my field,” says Dr. Abebe. He is the only one in his family who works in healthcare.

After finishing veterinary school, he practiced in Ethiopia, caring for both domestic and farm animals, like sheep – and yes, cows.

Vaccines were the answer

As he grew up watching his father’s cattle, and later as a practicing vet, Dr. Abebe said it was common and frustrating to treat animals, then too often watch the diseases return.

“I knew the only way to keep the diseases from coming back would be to vaccinate the animals. I got very interested in vaccine development and started looking for graduate programs where I might be able to study them,” he says. “I was fortunate to find a program at Wageningen University in The Netherlands which had a Biotechnology graduate program that focused on developing vaccines for both animals and humans. I was also fortunate to earn a scholarship, or I would not have been able to enroll.”

Going from Ethiopia to The Netherlands was culture shock, says Dr. Abebe. “It was my first exposure to the Western World, and I hadn’t thought it would be so different.” After earning his MSc, he returned home to a position studying meningitis vaccines at a joint program between his alma mater, Addis Ababa University, and the University of Oslo in Oslo, Norway. As the research progressed, Dr. Abebe found himself traveling between the two universities collecting bacteria in Ethiopia, taking them to Oslo, and preparing to test the vaccine on mice.

As he became more interested and invested in human vaccines, he decided to move on from veterinary medicine, which led to spending more time in Norway. Yet another case of culture shock for someone who had grown up in Ethiopia.

“It is very, very cold,” says Dr. Abebe, with a smile in his voice that was easily detected, even over the telephone. “But while Norway may be one of the world’s coldest, it is also one of the most beautiful countries I’ve ever seen.” However, that was not quite enough to win over his wife. They had gotten married after he completed his Master’s degree. Much of the time he spent going back and forth between Ethiopia and Norway, his wife, Firewoin Jemberie, remained in Africa where she was a nurse. “She just couldn’t handle that cold weather,” he says, again with the same chuckle in his voice.

Determining the next step

The meningitis research had progressed well at this point. It had gone into animal testing and four or five published papers had resulted. But as happens in the research arm of academia, which is so dependent upon grant support, there was no longer funding available for Dr. Abebe to remain with the program. He found himself in search of the next project.

“I stumbled onto a program that was looking at Alzheimer’s disease, Parkinson’s, and other motor neuron diseases,” he says. “My background in biotechnology and veterinary medicine were very compatible with these areas.” Dr. Abebe and his family were headed to Australia. Thanks to the project’s available funding, not only would living expenses be covered, he would also be able to pursue a PhD in Neuroscience at the institution, Flinders University in Adelaide, South Australia.

After earning his doctorate, Dr. Abebe worked in the Biochemistry Department at Monash University in Melbourne. He primarily tested anti-cancer drugs to examine if they could target cancer stem cells. Once tumors decreased in size, organs were sectioned to determine metastatic spread. It was eventually established that there was a decrease in tumor burden and size in research mice, which led to Dr. Abebe being named one of the country’s best young investigators by the Cure Cancer Australia Foundation in 2010. As the research progressed to human trials, he became increasingly involved in monitoring patient progress after study drugs were administered.

Dr. Abebe’s supervisor at the time offered him an opportunity to pursue yet another degree. “He said to me ‘Here you are with all of these degrees, but what I really need are more nurses who can run the trials and bring back the tumor samples. What if I gave you a day or two off each week to attend class, while you work the other days?’”, recalls Dr. Abebe. He accepted the offer.

As he neared completion of his nursing degree, he was eating lunch one day and noticed an ad in a nursing journal about a university that allowed you to work while going to medical school. He found himself quite interested in this medical school, Oceania University of Medicine, and wanted to learn more, perhaps how he could contribute to its faculty or curriculum. The first person he spoke with was OUM’s Dr. Scott Cunningham, now Director of Curriculum, who then was involved in faculty recruitment (before Dr. Paula Diamante arrived as Director of Faculty Affairs.) Dr. Abebe began soon after as an Academic Advisor when the advising program was just launching. Today, he is also a Research Advisor.

Despite being so busy at that time with both Monash and OUM, Dr. Abebe still felt he had more science to conquer – he wanted to study medicine and earn his MD. While he knew that she understood how he loved to learn and study, he also knew his biggest challenge would be convincing his wife. She continued nursing and by then they had two children, who today are eight and twelve years old.

“When I discussed my intention to study medicine, I presented my wife with clear time, budget, and flow management plans. She reminded me that it would take a lot of time and commitment to study, work, and run a family. However, ‘it is up to you,’ she said. I am very fortunate because she has always been incredibly supportive,” says Dr. Abebe.

He advises both current and prospective students to clearly communicate with their partners, make plans, make a schedule and budget, and decide how they will juggle study, work, and family responsibilities.

Dr. Abebe believes that his advisees appreciate that he understands their challenges, because he had to learn how to balance family, work, and studies, just like they do. “I’ve shared with them that they have to learn that they won’t have time for friends, but to always have time for family.”

He feels that OUM students understand the time and financial commitments that need to be made. “Time management is one of the biggest challenges, but they are mature students, so most do well once they sort out those time requirements,” says Dr. Abebe.

He also feels very strongly that students need to utilize all the resources OUM has made available to strengthen their ability to succeed.

“I’ve worked at and attended many universities, and I have never seen one as committed as OUM is to putting so many student resources in place. From academic, research, and clinical advising to mini-cases, exam preparation, Research Club, and Journal Club, there is so much support available,” says Dr. Abebe. “I have reminded students during our weekly meetings that I was lucky if I saw an advisor once or twice a year. Here at OUM, we all want them to be successful.”