PhD candidate tackles the same challenges as his MD students

Juggling a 40-hour work week with family time and another 40 hours of study is a typical scenario for Oceania University of Medicine students. But what about OUM faculty? 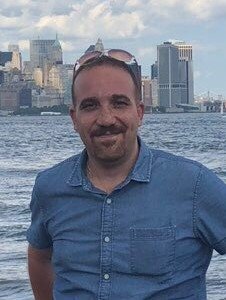 Ahmed Muhsin, MBChB, MPH, has a number of roles at OUM. He teaches the Cardiovascular System-Based Module and is a member of the Faculty Development Committee. Before that, he earned his medical degree at Almustansiriyah College of Medicine in Iraq, practiced for several years in both Baghdad and Australia, and moved to the US where he earned his Master of Public Health at Texas A&M University.

Since he has passed both the AMC exam and USMLE, it is befitting that he is an Academic Advisor to both Australian and US students. He is also a Research Advisor to six students and recently became a Clinical Student Advisor. When Dr. Muhsin isn’t managing those responsibilities, he spends 40-50 hours weekly as a PhD candidate in Immunology at the University of Texas MD Anderson Cancer Center.

“I’m doing the very same thing my students are doing,” says Dr. Muhsin about his ongoing challenge to manage time, work, and family responsibilities. “I am at MD Anderson every day until 5:00. Then I spend a few hours with my family and, after they go to bed, another four or five hours with my OUM students.”

Also, like many OUM students, Dr. Muhsin acknowledges how fortunate he is to have an invaluable support system.

“I have a very supportive wife. She has taken on all care of the house and kids. I couldn’t do it without her,” he says. Their daughters are 15 and nine years old, and they have a three-year-old son.

Safety was an issue

Having spent his teenage years in Iraq, in addition to graduating from medical school and completing his internship there, making the decision to leave was difficult. It is also where he got married and his first child was born.

“We wanted a real life in Iraq, but it was truly a war zone,” says Dr. Muhsin, noting that the most recent war began in 2003, the year he finished medical school. “Everything was getting worse. There became very little quality of life, security, basic needs. It was not a place to raise a family.”

But Iraq was a unique place to practice medicine and proved to be the beginning of his research interests in both public health and cancer.

After medical school, Dr. Muhsin spent several years working in emergency rooms throughout Baghdad, eventually becoming a Senior ER Medical Officer, constantly dealing with war injuries. In 2007, he left the anguish of Emergency Medicine and went into Family Practice. In that setting, he and his colleagues saw many cancer cases including increased incidents of leukemia and lymphoma as well as an alarming number of miscarriages and birth defects.  Despite a shortage of public health research in the country, it was becoming increasingly clear that the use of uranium in ammunition shells used during Iraqi wars in the 1980s, 1990s, and since 2003 was the likely cause. Seeing the number of people affected by the health issues associated with uranium, Dr. Muhsin began to understand the impact that research and public health programming could have.

“As clinicians, we are able to impact one or two patients at a time, but public health programs can potentially impact communities,” he says, stressing his concerns about the shortage of public health researchers.

Dr. Muhsin and his family decided to leave Iraq in 2009, and he began working as a GP in rural Australia (NSW, 320 km/200 mi west of Sydney). He and his colleagues saw patients in their practice during the week, then worked with native Aboriginal populations on weekends. As a group, they presented with health issues a bit different from what he had seen in Iraq, though cancer remained a concern. Here, doctors helped to identify and educate on carcinoma and other cancers, as well as increase their patients’ understanding of STDs and alcoholism. Realizing how little a population may know about their health, prevention, and treatment intensified his interest in public health. So much so that when Dr. Muhsin and his family moved to the US years later, he was drawn to the Master of Public Health program at Texas A&M.

From high school to OUM

As some of his Texas A&M professors were teaching remotely from California and New York, he began to think there may be a distance teaching opportunity for him in medical education. He created a LinkedIn profile, started doing online research, and OUM’s name kept coming up. On the OUM website, he noticed Dr. Sarmad Ghazi, Dean for North America, who also grew up in and attended medical school in Iraq. Coincidentally, they both live in Houston, Texas.

“What were the chances of that happening?” says Dr. Muhsin.

Even more improbable, they knew each other in Baghdad.

“Ahmed and I went to the same high school which had small classes, so we knew each other, even though I was a few years younger,” says Dr. Ghazi. “His life journey has been impressive, and as a non-traditional student himself, like many of our students, I knew he would be an asset to OUM. He is the father of three adorable children, and I consider him a big brother. I seek his advice on work and non-work-related matters.”

As do Dr. Muhsin’s advisees. He views OUM’s Academic Advising Program as one of the most involved, dedicated programs he’s ever seen.

“I don’t think there’s any program, perhaps in the world, where students meet with their advisors weekly, especially graduate students. I think the norm is perhaps once or twice during an academic year,” says Dr. Muhsin who acknowledges that sometimes students just want someone to talk to who understands their challenges, their stress.

“We have a very different student population. They are incredible,” he says. “As a medical educator, I like the small classes, the fact that we can learn all of our students’ names and get to know them personally. They are very motivated to become physicians, and I am proud to help them.”

Having passed both the USMLE and AMC, Dr. Muhsin has a unique perspective beneficial to OUM students from around the world.

“I am quite impressed with his sincerity, knowledge, and commitment and I certainly appreciate his understanding and awareness of the Australian health system through his work in rural Australia before moving on to the USA. He is definitely a great asset to the OUM faculty,” says Meshach Kirubakaran, MBBS, MD (Gen.Med), DM (Neph), MHA, FRACP, OUM Dean for Australia.