A FONDNESS FOR ACADEMICS

Ramanan Balasubramanium, MD – “Dr. Bala” to most at OUM – is a Pathology and System-Based Module Instructor, Academic Advisor, and Mini-Case Facilitator. While he practiced medicine at a number of global locations, in specialties ranging from Emergency Medicine, and Orthopedics to Critical Care and Internal Medicine, he has evolved into someone who loves teaching and loves academia. But medicine was not on his mind when he was a child. 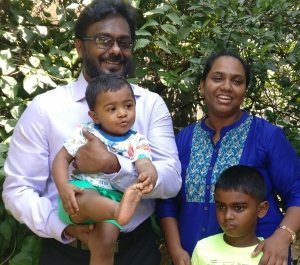 “I wanted to become a tennis player,” says Dr. Bala, who grew up in Sri Lanka and was a member of the country’s Junior National Tennis Team. He always loved tennis, still does, as well as other racquet sports – squash, table tennis, and badminton. He coached youth tennis when he was training in the UK.

When he was about 15 years old, he went on hospital rounds with his father’s friends who were physicians, learning about cardiology and gastroenterology. “My parents were not forcing me into medicine, but they definitely didn’t want me to go in the direction of tennis,” he says.

Much to his parents’ probable relief, Dr. Bala did decide to go to medical school and left Sri Lanka at age 18 to attend St. George’s University School of Medicine in Grenada, West Indies. He did most of his clinical rotations in the UK and also held Senior House Officer positions at hospitals throughout the UK after graduating from medical school.

“My intention had always been to return to Sri Lanka after medical school and practice there. But ongoing civil unrest and an unstable economy made that impossible. My parents ended up moving to Canada and my sister joined me in the UK while I was training there,” says Dr. Bala.

He had originally wanted to work in Emergency Medicine but also spent time working in Internal Medicine and Trauma/Orthopedics. When a mentor recommended Critical Care Medicine, Dr. Bala thought he had finally decided upon his specialty. Though the work was interesting, treating such serious illness became discouraging without much patient progress or positive outcomes, he says.

Value of keeping in touch

Throughout his years post-medical school, Dr. Bala had kept in contact with the Dean at St. George’s. While he was working in India, the Dean encouraged him to return to the university, perhaps do some teaching and decide how he wanted to proceed with his patient care practice.

“That was when I first realized how much I enjoyed teaching. It was teaching that gave me the most satisfaction. It still does,” says Dr. Bala. “I tend to get bored if I have to do the same things over and over, which I don’t experience with teaching.”

When the St. George’s Dean mentioned an opening to teach Pathology at a relatively new medical school in Aruba – Xavier University School of Medicine – that became Dr. Bala’s next stop.

“Xavier was only seven or eight years old when I joined the faculty, so there was not only opportunity to teach, but also to revise and strengthen the Pathology curriculum,” he says. “Pathology at Xavier had been very basic, straightforward, low intensity. But the medical school was preparing for its first accreditation with the Caribbean accrediting body, so the Pathology training needed to be revised. I found curriculum development especially interesting,” he says.

At home in academia

A few years into his time at Xavier, Dr. Bala was asked if he could assist with accreditation at American International Medical University (AIMU) in St. Lucia. This was an exciting opportunity to manage the university’s entire accreditation process, as Director of Quality Assurance and Accreditation.

Still, amid the important and rewarding accreditation work, he hoped to find a bit more opportunity to teach Pathology. He was finding that he missed it. Coincidentally, Oceania University of Medicine needed a Pathology instructor to teach via an online curriculum.

Dr. Diamante (OUM’s Director of Faculty Affairs), an old friend and colleague with whom he had worked before in Aruba, reached out to Dr. Bala with the opportunity to teach Pathology at OUM.

He was very curious. This was the first Dr. Bala had heard of a distance-learning curriculum for basic science instruction. Upon completing the interview process, which included a guest lecture, he began teaching at OUM in August 2016.

“It was initially quite time-consuming to prepare lectures. I was used to having days to present material, so it took a lot of reflection to modify and highlight the most important information,” he says. But through coursework in his MMed program, he knew that medical school curricula were pointing towards more online learning and student self-directed learning, which OUM had been very early to adopt. Accordingly, he learned to integrate material throughout his basic science and system-based module lectures, as well as within mini-case facilitation. Dr. Diamante says she has relied on his vast experience to assist with MSS, Renal, and GI SBM lectures.

So, what about OUM students and the challenges they face as non-traditional medical students?

“I am impressed with how they manage to balance, work, study, and family,” Dr. Bala says. “If you had asked me ten years ago, I would have thought those challenges were just excuses, but that was before my children were born during my Master’s program, so I know the difficulties they face.”

He also mentions how valuable he would have found a physician mentor, especially when he was struggling to make decisions and find direction during his UK rotations and post graduate training.

Dr. Bala feels fortunate to have returned to a now safe Sri Lanka for a few months and spend time with his sons, one now six years old and the other nearing his first birthday. He says his wife is also very happy to be near her family. He is currently experiencing an advantage to working with OUM, one that students also value when they choose the medical school’s distance learning curriculum: He can fulfill his roles from wherever he happens to be located.

He has even returned to tennis, though only on weekends because of the travel time. Luckily, he says he’s able to play badminton two or three times a week.