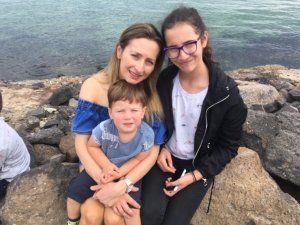 Like many of her students, Dr. Camera is busy. She and her husband have three children, ages 12, 4, and 2. After her last maternity leave she felt at a crossroads. She returned to RMIT University (formerly Royal Melbourne Institute of Technology) in Melbourne as a Lecturer in Pharmaceutical Sciences, but didn’t feel the same sense of achievement and fulfillment that she had before. Juggling her three children together with her university duties — committee appointments, lectures, administrative responsibilities, academic advising — had become especially difficult.

She currently teaches Pharmacology, her area of specialization, and recently began lecturing on Genetics and Molecular Biology. She really enjoys teaching.

“I enjoy preparing for lectures and am often asked why it takes me so long to get ready. I tell them that teaching an area of science is like telling a story. If you don’t put it together so it flows, students won’t understand. It is very satisfying. One of my greatest joys is when a student says ‘I understand,’ ” says Dr. Camera, adding that sitting at commencement, watching her students graduate is another great joy.

Dr. Camera’s passion for research and her extensive time spent in the lab has also led to her new OUM role as Assistant Director of Research, working with Dr. Brown in his responsibilities as Deputy Vice Chancellor overseeing the research enterprise. She did a presentation at the March Student Conference attended by students from Australia and New Zealand where she discussed the research requirement and the assistance available to them.

“Since the conference, I’ve been inundated with questions, which makes me very happy. I want students to realize that we can provide them with a lot of help and support. This project doesn’t have to be daunting. I want to help them see that research can be interesting and we can really learn from it,” she says.

Academic advising is something else Dr. Camera wants more students to take advantage of at OUM. She doesn’t believe most students realize how unique it is to be offered regular one-on-one meetings with an academic advisor. Advisors at other universities may not allocate much time to a student outside of lectures, perhaps 5-10 minutes per term, she says. OUM’s advisors are committed to ongoing, scheduled meetings intended to guide and help, whether their students’ needs are academic or personal. She has been honored that her advisees have trusted her enough to share some of the private information they have during their meetings.

As a lecturer, academic advisor, and a research advisor, Dr. Camera says the most important thing she wants every student to understand is quite simple: There is no stupid question.