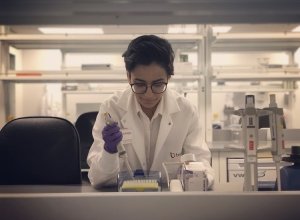 “Growing up, my parents encouraged us to be curious,” says Khatija Pinky Ali, MD, OUM Academic Advisor and Mini-Case Facilitator for the Cardiovascular, Neurology, and Respiratory system-based modules (SBM). “I come from a very philosophical family. We were taught to think abstractly,” she says of growing up near Toronto, in Canada’s Ontario province. “I became interested in philosophy during high school and originally intended to pursue a PhD in Philosophy when I began at McMaster University.”

BioSapien’s initial focus is on BioMesh, a biodegradable gauze-like product used for localized drug delivery in terminal cancer patients. A provisional US patent has been filed and its infringement search (Freedom to Operate – FTO) is pending. The Canadian patent will be filed by the end of the month.