Seán Klinkradt, BJuris, LLB, MSc, MIP, BPhil, PhD, who began teaching Molecular Biology and Medical Genetics in 2018, in addition to acting as an Academic Advisor, happened to work in the lab next to OUM’s Daria Camera, PhD, Director of Research, early in his doctoral studies. The two eventually shared a lab. Fast forward a couple of years and one day over coffee, he said to her “I’d like to get back into teaching. I miss it.” He had previously lectured at the Holmesglen Institute and Endeavour College in Melbourne, Australia, as well as at the University of Port Elizabeth, his alma mater, in South Africa.

He knew that Dr. Camera had gotten involved with a medical school that delivers a lot of its pre-clinical basic science curriculum online and was finding it quite fulfilling. He knew about her work with OUM because he had been the one who brought it to her attention, after hearing about it from one of the students he tutored. He decided to contact OUM himself. 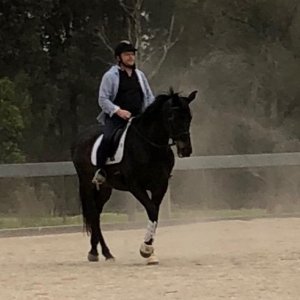 He inherited his mother’s animal rescue tendencies, he says. While he and his partner, Mark, initially only had two cats, they now have two horses, 12 outside rescue cats (shared with the neighbors), a regular raven, and Alan, their Labrador. Dr. Klinkradt is especially proud of his thoroughbred horse, Winston, which has retired from racing. Essentially, if an animal shows up at the door, it isn’t likely turned away.

When the opportunity presented itself, he began PhD studies. He first worked on the nuclear receptor Nur77 and metabolic syndrome before transferring into neuroscience in the Anatomical Neurochemistry Laboratory of Professor David Pow, a renowned neuroscientist. During his doctoral studies, Dr. Klinkradt (and his PhD supervisors) discovered a new glutamate transporter in the brain of mice.  Dr. Klinkradt’s PhD research focused on the role that this transporter, known as GLT-1d, plays in developing, adult, and pathological mouse brains. The pathological conditions were stroke and amyotrophic lateral sclerosis (also known as ALS or motor neuron disease). This year, he also began working on his second PhD at the University of South Africa Faculty of Law, studying Neurolaw and legal accountability in light of neuroscience developments within the research community.