Being a good listener is a valuable skill in many professions, especially medicine. If you happen to be good at it and enjoy listening to people’s stories, even better. Such is the case with Dr. Sajid Siddiqi, OUM Clinical Advisor and Clinical Course Director for Community Medicine.

“When I was young, I remember meeting doctors and thinking how much I liked the way they listened to people and the way they treated them,” says Dr. Siddiqi. “That was what originally drew me to medicine. I had not yet considered being a doctor as much as I knew I liked meeting people and hearing their stories. I have a passion for listening to people’s problems,” he says. 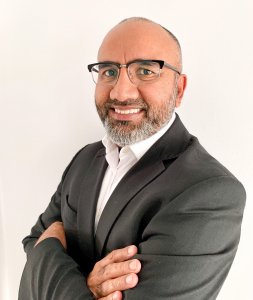 His listening skills and love of hearing patient stories likely drew him to Family Practice.

“I like being a patient’s first point of contact, sitting down and asking questions. Patients usually want to tell you what’s going on, you just need to get them talking. Hearing that their leg hurts, or they can’t sleep gets the conversation started,” he says.

Dr. Siddiqi grew up in a small town in Pakistan. The schools were not as good as his family would have preferred, so his father sent him and his brother to boarding school, a six-hour drive from home, for grades 1 through 12.

By the end of high school, he had realized that he wanted to be a doctor. But he first wanted to spend a few years working with his family. His father’s export business provided raw materials to oil and textile factories located throughout the Asia-Pacific region.

“This gave me the opportunity to spend time with my family after all those years in boarding school,” says Dr. Siddiqi. “We did a lot of business in the Far East, which is also how I came to learn about and attend medical school in the Philippines,” he says.

It was the years in boarding school and his experience working with businesses in other countries that marked his course for many years to come. “I learned not to be homesick or afraid,” he said, which opened his opportunities for medical school in the Philippines, eight years in the UK for post graduate training and a GP practice, and now more than ten years working and practicing in Australia.

A military connection led to OUM

After leaving the UK in 2009 to set up practice in Australia, Dr. Siddiqi spent five years as a GP and Community Physician before becoming a Senior Medical Officer in the Australian Defence Force. While working at Randwick Barracks Health Centre in Sydney he met a Captain in the Royal Australian Army who worked at the Army Learning Production Centre. A couple years later, that individual reconnected with Dr. Siddiqi to seek his advice because he was considering attending medical school. The captain who sought Dr. Siddiqi’s advice? Tom Dalton, now in his final year at OUM, and just finished his second year as President of the OUM Student Association.

“Dr. Siddiqi was the person I initially discussed OUM with to gain his thoughts on what medical study via an e-learning platform would be like. He also wrote a recommendation letter for my OUM application,” says Tom who eventually approached Dr. Siddiqi to become his Physician Mentor.

“He told me that it was part of a doctor’s role to teach and mentor junior doctors and students, explaining that the word ‘doctor’ came from the Latin word for ‘teacher,’” says Tom.

Dr. Siddiqi and Tom continue to have one of OUM’s most enviable and beneficial working relationships. Not only was Dr. Siddiqi Tom’s Physician Mentor during his pre-clinical studies, but he also became his Clinical Advisor when Tom started clinical rotations. They have worked together throughout Tom’s entire medical school journey. Dr. Siddiqi also supports Tom in preparing for the AMC exams, which he himself navigated when he arrived in Australia from the UK.

Dr. Siddiqi was thrilled with the OUM curriculum because it was the way he had been taught during medical school at Southwestern University School of Medicine in the Philippines.

“I was one of eight or nine first- and second-year medical students selected for a pilot study on problem-based learning (PBL). I was fortunate to have had that opportunity. At the time, in 1995, many universities did not think it would work, though today, almost all medical schools teach this way,” he says.

He embraced his role as a Physician Mentor and as he became more familiar with OUM’s program, he told Tom that he wanted to get more involved. Tom directed him to Dr. Paula Diamante, the University’s Director of Pre-Clinical Education and Faculty. She enlisted his global experience as a GP to revise the Community Medicine curriculum as its Clinical Course Director. He also has become the Clinical Advisor for additional students.

According to Dr. Diamante, he came onboard at an important time, helping OUM change the textbook to better address Australian board exam requirements. Since Community Medicine is a mainstay of the AMC Exam, it was very important to re-focus on that student need, she says.

Dr. Siddiqi is anxiously awaiting the opening of his new practice, which happens to be about ten minutes from home. Married, he and his wife have three sons, ages 16, 14, and 7. While he was the only physician in his family, time will tell if he has introduced a new career path to his sons.