Dean Davis, MD, Oceania University of Medicine Class of 2017, has entered his final year of residency at Southern Illinois University (SIU). During his time at SIU, he was named Resident of the Year in the University’s Family and Community Medicine Residency Program at Memorial Medical Center in Springfield.

“Each year, at the spring and fall retreats, the faculty and residents vote for a Resident of the Year in each class. It meant a lot to be recognized by my peers,” says Dean, who also did his clinical rotation in Surgery within the SIU system. 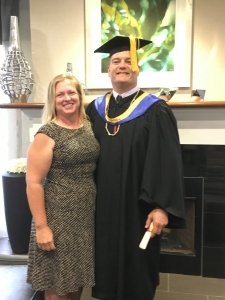 Dean has a 26-year-old son, and his 17-year-old daughter will graduate from high school the same year he finishes residency. His family has a mantra, one that is especially significant to Missie: “During stressful periods, we look at each other and say ‘August 2020.’ That’s when my residency is done.”