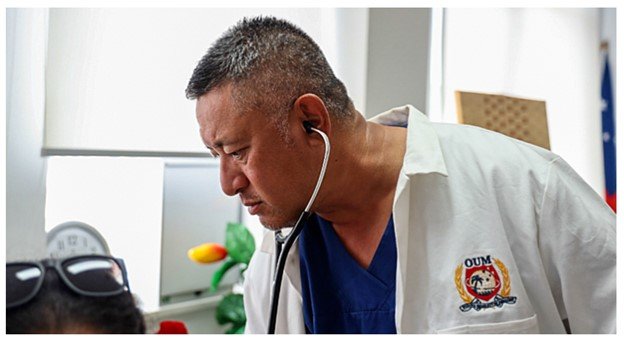 A Samoan doctor has won the Sir Terepai Tuamure Maoate International Study Award in recognition of his work in Samoa and the region.

Manufalealili Toleafoa Dr. Viali Lameko was honoured during the 2020 Pacific Medical Association Scholarship Awards event at The Cordis in Auckland on Wednesday evening.

He was among 13 award recipients, with Manufaleali’i’s award being the most prestigious.

The recognition comes with NZ$20,000 (T36,000) to undertake a course or study in an International Institution. Manufalealili Lameko is also the Vice-Chancellor for the Oceania University of Medicine.

According to a media statement issued by the Pasifika Medical Association, the annual scholarship scheme costs a combined total of NZ$90,000 ($T162,000).

The scholarships for undergraduate and postgraduate studies, which have been named after life members of the P.M.A., have been awarded on a yearly basis since 2018 and provide tuition and study related costs to assist people into medical and health related careers.

The P.M.A Chief Executive Officer, Debbie Sorensen, told the New Zealand Doctor that the scholarships ensure more Pacific students are supported in careers that will benefit the Pacific community.

“Our group has been supporting Pacific clinicians for over 20 years, we recognise their value to the health sector and Pacific communities continue to benefit from their expertise,” she said.

She added that the scholarships help remove any hardships and barriers students might have in entering tertiary education.

“We know that the average income for Pacific people is $20, 000 per annum so if you come from a family where money is not readily available, then that’s tough. We don’t see this as a handout but as a hand up.

“There are many willing hands around these people to support them to be the very best that they can be.”

Many of the past recipients have been the first in their families to go to university and have been mentored by senior Pacific health professionals and members of the P.M.A.

As Vice Chancellor of OUM, Dr. Lameko, the first Samoan to hold this post, serves as OUM’s chief executive and leads its efforts to expand its presence in Samoa and the South Pacific region, including increasing opportunities for clinical clerkships. Dr. Lameko, who has served as OUM’s Director of Clinical Studies and Associate Professor, most recently served as Director of the Clinical Program and Senior Lecturer for the Faculty of Medicine at the National University of Samoa (NUS).

Dr. Lameko has served as advisor to both the Western Pacific branch of the World Health Organization and the Secretariat of the Pacific Community on a number of health-related issues prevalent in the region. He is also a recipient of the Commonwealth Leadership Conference, Pacific Island Future Leadership Tour, and the Pacific Forum Greg Urwin Pacific Leadership Award. In Samoa, Dr. Lameko holds his High Chief Title of Toleafoa from the village of Fasito’otai and Oratory Chief Title of Manu-Falealili, from the village of Sapunaoa in the District of Falealili.

His dissertation title appropriately is “Cultural Influences on Dietary Behavior among Samoan Adults.” Dr. Lameko is committed to conducting research at OUM that improves the health of people in Samoa and in other countries where the University’s faculty and students live.