Opened with greetings from Taffy Gould, OUM’s Founder and Chairman, the 14/15 May University-Wide Meeting featured a detailed hour of updates regarding the University’s news, policies, and activities.

Ms. Gould said she had been delighted to see so many students attending the March Student Conference in Melbourne, AU – together with so many new doctors graduating. She also stressed with students the importance of asking for help “whenever and wherever you need it,” a sentiment reinforced by Vice Chancellor Viali Lameko, MBBS, MPH (PhD Candidate).

“From Taffy and leadership to faculty and advisors, we are here to help our students. We are all here to make sure you realize your dreams to become physicians and medical officers in the future,” he said. 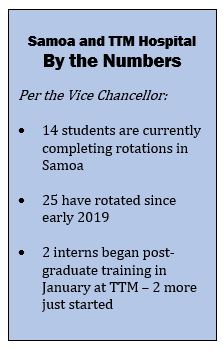 Dr. Lameko reported that 14 students are currently completing clinical rotations in Samoa – 25 have rotated since the beginning of the year. He added that two interns began postgraduate training at TTM Hospital in January with two more expected to start this month. Most of these interns are supported by the Samoan Ministry of Health program to strengthen the number of physicians practicing in Samoa and all of Oceania. He reminded students that while emphasis may be on local residents, the Ministry accepts applications and considers individuals from all countries.

It was also announced that OUM will be working more closely with the Western Pacific Association for Medical Education (WPAME). The WPAME is a partner organization of the World Federation for Medical Education (WFME) which works with the World Health Organization (WHO) to enhance the quality of medical education worldwide, including the establishment of accreditation standards. OUM recently attended the WFME conference in Korea to learn and prepare for the new accreditation requirements coming up over the next few years.

Research Timeline: While Dr. Brown referenced the integration of Zoom into OUM’s curriculum delivery and the adjustment to exam windows (discussed at length later by Chris Dudley), he focused his discussion on the importance of a timely approach to the required research project.

“While we currently have a high percentage of students involved in their research and we have graduates during the last few months who have had impressive manuscripts accepted for publication, we have students in their final SBMs yet to begin their projects,” said Dr. Brown, reminding attendees that this is a graduation requirement for MD students.

Since delays in completing research have resulted in delayed graduation dates, the Academic Board has revised the requirement for those matriculating in Term 1904 and forward: Students must have their research prospectus written and approved before they are able to begin clinical rotations. Dr. Brown went on to say that while this new change does not impact current students and their progress into clinicals, they should keep in mind that the research process can be lengthy, depending on the project, so he advised against waiting too long to begin.

By the numbers: Dr. Meshach presented an interesting snapshot of what OUM’s Australian students are accomplishing, from completing rotations in global locations to attendance at the first face-to-face Advanced Clinical Skills Course. In addition to these statistics, he reported on the successful March Student Conference highlighting the new, popular OSCE session and the 14 graduates. He added that the next OSCE, for which eight OUM students are preparing, will be on 27 July. Early December is when 2019’s final OSCE is planned.

Getting stronger: Dr. Ghazi provided an overview of clinical rotation sites in North America, noting that while most rotations are being completed at Southern Texas Health System in McAllen, Texas, or Jackson Park Hospital in Chicago, Illinois, students are also rotating in Baltimore, Maryland and Houston, Texas. He also discussed the recent technology updates which have taken place with Zoom, Proctortrack, Moodle, and Clinical Key. “OUM is strong and its reputation is getting stronger, resulting in more student referrals and more applicants,” said Dr. Ghazi, who chairs the Admissions Committee.

Three new teaching faculty have joined OUM since the last University-Wide Meeting and Dr. Diamante gave an overview of the mandatory training new instructors go through at OUM. In addition, four new research advisors have joined the faculty, to provide additional support with the Research Requirement, and five new clinical advisors have come on board for the Australian students.

Dr. Diamante reported that students are doing well on the End-of-Rotation Exams launched over the past year. To assure continued success, she advised students to

Accreditation Preparation: “In addition, we are ‘up to our eyeballs’ in preparation for re-accreditation. We are currently in the documentation phase and site visits will take place in 2020,” explained Dudley. The documentation phase involves a self-study in nine areas of the University, each led by a member of the faculty or administration: Mission & Objectives, Faculty, Curriculum & Instruction, Clinical Teaching/Service Facilities, Research, Students, Library, Administration, and Facilities & Other Resources. Each group has representatives from faculty, administration, students, and graduates looking at the strengths, weaknesses, threats, and opportunities associated with their assigned area. Past self-study documentation, once presented to PAASCU* has totaled over 1000 pages of information, he added.

“The goal is obviously to determine how to capitalize on opportunities and mitigate threats,” Dudley said. “Areas are working on the first drafts of their respective self-studies and OUM will present the completed/combined document to PAASCU in late August/mid-September. Dr. Lameko, Dr. Brown, and I will go to the Philippines in January to meet with the site visit team to plan next year’s visits to Samoa/ANZ (March) and North America (July).”

He advised that all students, regardless of whether or not they are on a committee, are encouraged to share ideas or suggestions. “If you have a curriculum idea, share it with Dr. Cunningham or Tom Ignatius. If you have a research suggestion, send it to Abimbola Farinde or to Dr. Brown.”

OUMSA: Closing out the meeting was Tom Dalton, third-year student and newly-elected president of the OUM Student Association (OUMSA). He shared the names of his colleague officers, noting that while he and another board member are new, the other three are returning officers, which provides good continuity of leadership. Tom shared the organization’s goals and the tangible/non-tangible benefits OUMSA members earn as part of an international chapter of AMSA, the American Medical Student Association, which include discounts on travel, test prep, educational supplies, and more.

“OUMSA aims to be a conduit and unified voice of representation between students and University administration,” Tom said. Meetings are typically around the last weekend of each month and are announced in the Moodle Newsfeed.

The May University-Wide Meeting finished right on schedule after one hour, in time for students to get to class. The next meeting will likely take place in mid- to late-September.

Those unable to attend the live event are strongly encouraged to take advantage of the recorded meeting found here and in the University-Wide Meeting classroom in Moodle.