In case your studies have kept you from watching or reading the news of late, measles is back. The disease that has largely been eradicated in many parts of the world has sadly returned with a vengeance to Samoa.

The Government of Samoa declared a national State of Emergency on 15 November 2019 which closed schools indefinitely and banned minors from attending public events. In addition, all citizens were mandated to receive the MMR vaccination. 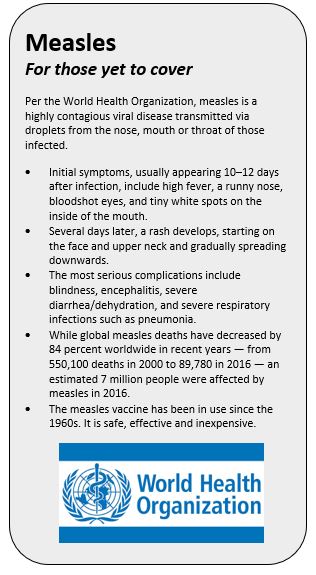 During one single day in mid-November, 114 patients were diagnosed with measles. At the time of publication, more than 4,200 cases were confirmed and there have been 62 deaths, most under the age of five. Considering Samoa’s population of 200,000, the numbers are staggering.

OUM faculty and clinical students are soldiering on at TTM Hospital, which has become the epicenter of treatment for the outbreak. Roughly 85 percent of patients needing hospital admission are being cared for at TTM, which also receives transfer patients from Samoa’s district hospitals and health centers that are without ICU services.

“While the majority of doctors in Australia, New Zealand, and the US have never seen measles, the OUM students here in Samoa are sadly becoming very capable of diagnosing, managing, and treating cases across many stages of presentation,” says Tom Dalton, third-year student and President of OUMSA, currently completing his surgical rotation at TTM Hospital. “It has been inspiring to see students finish their ward duties, then help in the pediatric clinic to assist with the screening and care of sick children or take on additional work required in the other wards with the loss of NUS students,” he says. (NUS – National University of Samoa – medical students would normally also do clinical rotations at TTM Hospital. The State of Emergency closed NUS, a public institution.)

The United Nations UNICEF agency has brought in more than 100,000 doses of measles vaccine and medical support teams have arrived from New Zealand. Australian physicians, nurses, and public health professionals brought in a medical tent and established another PICU (Pediatric Intensive Care Unit) near TTM. To date, more than 58,000 people have been vaccinated, according to BBC News reports. All OUM students are required to have the MMR vaccine, among others, before arriving in Samoa for clinical rotations.

Watch Moodle and OUM social media for updates on the measles epidemic. Please continue to keep Samoa’s children and families in your prayers, as well as volunteers and our own students, staff, and faculty.