A childhood outdoors drew her to the sciences

Growing up in the state of Michigan (USA), Nicolette McGuire, PhD, loved being outdoors. She and her family took two vacations each year, typically in the western states, skiing in the winter and hiking in the summer. 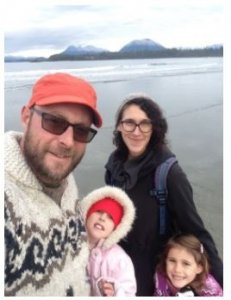 “To me, that was real living. Being outside, collecting huckleberries and being near plants and animals. Growing up in the suburbs, I also remember a local environmental center where in the summer my siblings and I would collect water and plant samples and look at them under the microscope,” says Dr. McGuire, assistant professor at Oceania University of Medicine (OUM). “I was quite aware, early on, that we were all part of something much bigger,” she says.

Deciding to study biology at the University of Victoria in British Columbia (Canada) seemed like a logical next step. There, she became interested in salmon as an animal model, working as an undergraduate in the labs of Dr. Tom Reimchen and Dr. Craig Hawryshyn. Salmon have a metamorphosis that occurs in their retina through the course of their migration from stream to ocean and back. Learning the role that thyroid hormones play in those retinal changes is what launched Dr. McGuire’s interest the field of endocrinology.

She was fascinated by how hormones act as a system of chemical messengers, maintaining metabolic balance and keeping bodily functions normal in so many different species, including humans. In particular, reproductive hormones caught her interest because of the system’s sensitivity and she jumped at the chance to study reproductive endocrinology in graduate school at the University of California at Berkeley (UC-Berkeley).

“My graduate work was done in one of only three labs in the world which studied a newly discovered reproductive hormone. My principal investigator, Dr. George Bentley, was instrumental in characterizing gonadotropin-inhibitory hormone (GnIH), which blocks the central hormone that activates the reproductive system,” says Dr. McGuire, whose graduate work involved understanding why GnIH, a neurohormone, was being expressed in the testes and ovaries of songbirds, frogs, rats and primates, and what implications this had for infertility.

She and her husband were not married long before they moved to UC-Berkeley to begin her doctoral program. Their first daughter was born during her studies; Dr. McGuire was 8 months pregnant with their second daughter when she received her PhD.

“My lab mate was also pregnant when she received her PhD. We joked that reproductive endocrinologists take their jobs very seriously,” she says.

When she and her husband decided to return to British Columbia (he is Canadian), she was presented with an opportunity to leave academia to work for the provincial government’s Ministry of Health. She is now the Provincial Director of Research.

When she entered into government work, Dr. McGuire worried about missing those aspects of academia that she especially enjoyed.

“I wondered if I would be able to let go of teaching. I like fostering those ‘ah-ha!’ moments, walking students through a process and seeing the light bulbs turn on. As a PhD student, I had reached a point where students asked to move into my classes. I wasn’t ready to give up teaching,” says Dr. McGuire.

Her sister, also a professor, offered a suggestion. She had been looking at the higheredjobs.com website.

“She said, ‘You should look on that site. There are a lot of online teaching opportunities.’ She knew I had reservations about leaving teaching. She also knew I essentially lived in the middle of nowhere in rather rural British Columbia,” chuckled Dr. McGuire.

Upon finding open positions at OUM and contacting the medical school, one of the first people she spoke with was Scott Cunningham, MD, PhD, Director of Curriculum. Since he is also a reproductive endocrinologist, Dr. McGuire said they hit it off pretty quickly.

“Unlike other medical disciplines, the reproductive endocrinology universe is rather small and homogeneous. In addition, one of the most influential academics in my life graduated from the same program as Dr. McGuire, so I felt that I knew her before the formal interviews began here at OUM,” says Dr. Cunningham.

Knowing she would need to develop different ways to engage and challenge students in an online classroom, Dr. McGuire originally thought she would ease into teaching.

“I had intended to just create course content in the beginning, thinking I would teach later on. But one of the things you are asked to do as part of the faculty recruitment process is present a guest lecture. Once I did, the plan changed,” she says. “I think I started at OUM in August of 2012. By September, I was teaching.”

Dr. McGuire currently teaches both the Endocrine and Reproductive System-Based Modules, sometimes separately, sometimes both during the same term. She also presents the Topics in Medicine Preventive Medicine segment. She especially loves the diversity of OUM’s student body.

“I love that I’m in a classroom with students from all over the world, in different time zones, with different backgrounds. I have such respect for our students. I appreciate that the vast majority have families, full-time jobs, and mortgages, yet they excel in pursuing dreams that many have had their whole lives,” she says. “I have had students who were the first in their family to attend college, let alone medical school. I love being part of their journey and seeing them through to becoming doctors.”

Dr. McGuire, her husband, and their daughters spend as much time outside as possible, just as she and her family did when she was growing up.

“You can enter a park trail system from our yard. We hike, kayak to set crab traps, and we recently got a fishing boat,” she says.

It sounds like family history may be repeating itself.