Welcome to OUM’s 32 new students who went through their all-Zoom orientation at various times from late June through mid-July.

Thanks to COVID-19’s persistence, North America’s orientation that is usually held live near OUM clinical sites in Houston, Texas, was cancelled for July. Orientation had to be re-invented. Luckily, OUM was able to share many of the lessons learned 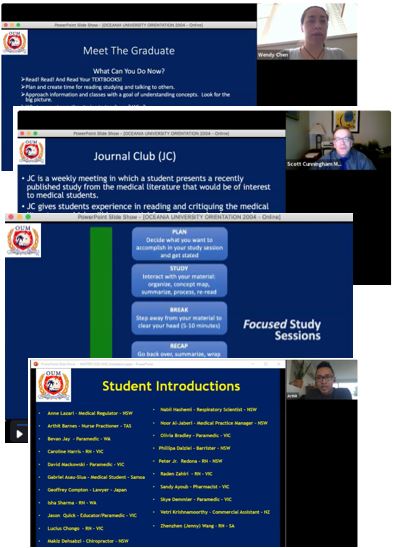 from the Australia-New Zealand-Samoa orientations which have been largely online for a number of years.

Whether joining the University as one of the 27 new MD students or five new Post-Baccalaureate students, every one chalked up his or her first medical school success during recent weeks: completing more than eight hours of recorded and live orientation and pre-orientation sessions. For Australia-New Zealand-Samoa students, it was 476 minutes and for North Americans, 621 minutes.

“Our newest incoming class definitely got a good taste of the distance-learning curriculum in online classrooms, thanks to our new orientation delivery,” says Chris Dudley, Deputy Vice Chancellor for Administration & Student Affairs, who orchestrated faculty and staff in developing this elaborate production of live and recorded sessions – and the associated several hundred PowerPoint slides. “On top of it, this had to be scheduled, recorded, edited, delivered, and digested by students in a matter of weeks,” he adds, congratulating everyone for doing their parts.

This newest cohort is made up of one-quarter RNs (8), 19 percent nurse practitioners (6), and nine percent paramedics (3). The class also includes two lawyers, two pharmacists, and 11 more students with careers ranging from a grants manager and respiratory scientist to a dental technician, education specialist, acupuncturist, and new university graduate.

Eighteen members of the new class live in Australia, 11 in the USA, and one student each resides in Samoa, New Zealand, and Japan. The class represents 16 birth countries and collectively speaks 11 languages, continuing to reflect the University’s longstanding student body diversity.

While this year’s January class was slightly younger than usual, averaging 33 years of age, the average age of the new class is 39 and ranges from 24 to 63.

Rounding out this group’s demographics – 62 percent are female and 38 percent are male, generally reflecting OUM’s overall enrollment. Many in this group clearly have multiple degrees since there are 51 total for the 32 students – 31 Bachelor’s degrees, 16 Master’s degrees, and 4 Doctorates.