OUM announced the establishment its Office of the Ombudsman in late 2021, led by Nicolette McGuire, PhD, Director of Student Affairs and Ombudsman.

THE ART OF LISTENING

A news story on the HigherEdJobs website in 2016 reported that approximately 40 percent of global universities had an Ombudsman. If someone’s undergraduate institution wasn’t one of those universities, they may not be familiar with the concept. OUM announced the establishment its Office of the Ombudsman in October, led by Nicolette McGuire, PhD, Director of Student Affairs and Ombudsman.

“The Ombudsman is an additional option for solving problems or resolving concerns, in addition to existing procedures already in place. I listen to visitors — visitor is the profession’s preferred term for people who connect with the Ombudsman — provide counsel to resolve issues, and advocate on the visitor’s behalf, if necessary,” explains Dr. McGuire. The office is designed to support and improve the experience of all students, faculty, and staff regarding any issue which affects their work or studies, she says. 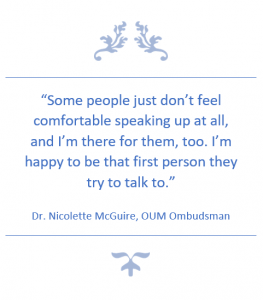 “The key concept is confidentiality. Basically, anyone can contact me, vent their concern, and be helped with no one else knowing that we have communicated or what we discussed,” says Dr. McGuire.

When interacting with the Ombudsman, visitors may expect fair, equitable treatment, and freedom from retribution for bringing issues forward.

Dr. McGuire says there have been a lot of visitors since the office opened. Many have had pent-up concerns and felt they had nowhere to go for help or guidance. Others have felt they brought their concerns forward, but no one took them seriously.

“If someone simply is not sure where else to turn and wants someone to listen and guide them, then they are invited to contact me. Listening and making sure a visitor feels heard is a very big part of the job,” says Dr. McGuire. “Some people just don’t feel comfortable speaking up at all, and I’m there for them, too. I’m happy to be that first person they try to talk to,” she adds.

The Ombudsman could help if someone:

The Ombudsman’s Office may be reached confidentially via email or by Zoom appointment. Zoom sessions are not recorded, nor are they calendared. In fact, the only reason that records are kept is to be able to report trends or ongoing issues. No one’s name is ever shared without their permission.