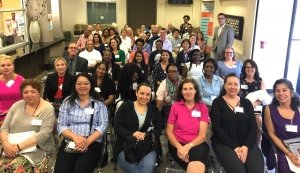 The weekend of 14 July was a big one for OUM students—the University greeted 29 new students at orientation sessions for North American and Australia-New Zealand students, while 36 continuing students gathered in Houston, Texas.

“Every other year, we have a Student Conference for our North American students that coincides with the new student orientation, and this amazing synergy takes place,” says Chris Dudley, Deputy Vice Chancellor for Administration and Student Affairs. “It’s a lot of fun seeing new friendships kindling and old friends getting together. Even the students at the online orientation for Australia-New Zealand were making friends and group study plans.”

Among the new students, 20 joined the MD program and nine took the post-baccalaureate route, two-thirds are female, and the average age is 40 with a range between 23 and 66 years old.

For the traditional white coat ceremony for new North American students, Dr. Alan Lee, a recent graduate from Hawaii, was on hand to help with their initiation.

Joining the new students at orientation were 36 current OUM students from all corners of the US — New England to Hawaii and Florida to Minnesota — as well as from Canada, South Korea, and New Zealand.

“Meeting our students in person and hearing their stories of what inspired them to go to medical school is just so gratifying,” says Taffy Gould, OUM’s founder and Chairman of the OUM Council.

Three student information sessions airing in August were spawned from the Student Conference. Click here for more details. The info sessions will be recorded for all students to attend and learn.

North American Student Conferences are held in even-numbered years. During those years, new student orientation is scheduled to coincide, giving both new and current students the opportunity to connect. The next student conference will be held in mid-July 2020, likely in a city where OUM has clinical rotations.

The Australia-New Zealand Student Conference is held annually in Melbourne, next scheduled for 9-10 March 2019. Details will be available soon.