MBBS WILL BE DEGREE #6

The fact that Paul Lam had his first thoughts about becoming a physician back in his early 20s is a common denominator with many of his Oceania University of Medicine classmates. The fact that he was nearly 50 when he enrolled at OUM? Again, not that unusual within OUM’s student body. But his path did take unique career twists including five different university degrees and another five professional certifications related to accounting, taxation, and investments. 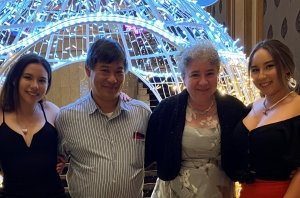 Paul Lam and his family immigrated to Australia from Hong Kong two weeks before his 17th birthday and his father opened a Chinese restaurant. When Paul started at Monash University in Melbourne a few years later, he majored in Physiology and Biochemistry.

“Sadly, two years into my studies, my mother came down with pancreatic cancer and died two years later. It was a very difficult time for my family,” says Paul.

But he persevered and earned his BS with Honors in 1986. He was then offered a scholarship to work on a PhD in Pharmacology, also at Monash, and had his first thoughts about eventually studying medicine. Meanwhile, he continued to help his father in the restaurant.

“I do have one thing on my resume that many people don’t have – 16 years of Chinese restaurant cooking experience,” he chuckles. Actually, a serendipitous trip to the bank across the street to get change for the restaurant launched his business career.

Change for a dollar equaled a career change

“There was a sign there in ANZ Bank that said, ‘Part Time Staff Needed.’ Who knows how the discussion even got started, but after speaking with the bank manager and what I have called Divine Guidance, I was offered a job as a graduate trainee at the bank, starting soon after.”

ANZ Bank also sent him to Victoria College/Deakin University to get his accounting degree and later an MBA from Heriot-Watt University.

The next few years were good to Paul and his family. He held an important international banking position with ANZ. Eventually, Paul left the bank and opened Taxfin Services Pty Ltd, a successful accounting firm which has largely been run by his daughters while he has been in medical school. Paul’s older daughter will finish her business degree in December. His younger daughter has completed her nursing diploma and is now a Registered Division 2 nurse. She is also studying for a double Bachelor of Business/Bachelor of Law degree. Both daughters study at Australian Catholic University.

“In order for them to continue, I am required by law to complete either a Graduate Diploma or Master’s degree in Financial Planning during the next few years in order for me to keep my financial services license so that my daughters can continue managing the business. I guess the MBBS won’t be my last degree,” says Paul.

Eventually, Paul began once again considering medical school. He saw an ad for a new medical school opening in Queensland, 2000 km/1200 miles and two states away from his home in Victoria. But he attended informational meetings and researched the new school, which then included a $260,000 price tag. He says those fees have today risen to $350,000 to earn that school’s medical degree.

Paul’s additional research told him that in Victoria, he would not be accepted into medical school because his science degrees were more than ten years old. But now he could not stop thinking about medical school. What about earning a “newer” degree that would give him clinical health care experience? How about nursing? Gladly, he found a part-time program that allowed him to continue running his business. It was at Monash University, one of his alma maters.

“One day, when I was doing a client’s taxes, medical school came up in the discussion. She said she knew of an international alternative pathway to medicine and found information for me about OUM,” says Paul.

He spoke with a graduate, spent a lot of time on the phone with the Melbourne office, and took part in two of OUM’s information session webinars.

“During one of the info sessions, Dr. Cunningham (Scott Cunningham, OUM Director of Curriculum) said something that really caught my attention. He said that you have to ‘choose a medical school that meets your needs.’ Being able to work part-time during the pre-clinical curriculum was a big selling point for OUM, just as it had been with my nursing program,” says Paul.

What about being half-way through that program? Paul did not want to drop out of nursing. So, he didn’t. In fact, he earned his Bachelor of Nursing degree after starting at OUM.

Paul says that he was surprised during pre-clinicals at how he managed working and studying. He credits his family’s support for his success.

“Ideally, we would not have to continue working, but as adult learners, we needed to make ends meet. If parents, or a partner, or a spouse can’t support you full-time for four years, it is difficult to study medicine,” states Paul, who says of his wife, “I owe her big time.”

Today, Paul is nearing the end of his medical education at OUM, awaiting his OSCE and hoping to graduate early in 2021. For the last two years he has also been treasurer of the OUM Student Association. As for the future, Paul says his multi-skills in several areas of business are invaluable to a medical director or a doctor running a practice. He also has interest in oncology.

“My wife manages a chain of medical centres,” says Paul, adding proudly that his wife is also a CPA and will finish law school in 2021. “Several of our medical and business colleagues think I should be a medical director in the future. I’ll certainly consider it.”

“Who knows, perhaps I’ll get back to that PhD I never got a chance to start.”