When COVID-19 made its grand entrance earlier this year, everyone was forced to adjust life at home, at work, and here at OUM. No one was quite as impacted by the coronavirus and its resulting quarantine as our clinical students whose rotations came to a hard stop.

Luckily, OUM and its many non-traditional medical students are skilled at adapting and are ever flexible. Not willing to sit back and let the pandemic gain full control, finding alternatives to in-hospital rotations became a mission. Two non-patient-contact clinical electives that could be delivered via Zoom were proposed and approved by the University’s accrediting body, the Philippine Accrediting Association for Schools, Colleges and Universities (PAASCU).

“We were able to make great progress, especially considering that we were starting from scratch on these and there was no precedent,” says Randell Brown, PhD, OUM’s Deputy Vice Chancellor and Chief Academic Officer. “We were working with hybrids, compared to other electives, and it was imperative that we made certain that these would withstand the scrutiny of accreditors and licensing boards.” The first one ready to launch was Radiology. It was taught by Adam Howman-Keil, MD, OUM Class of 2013. 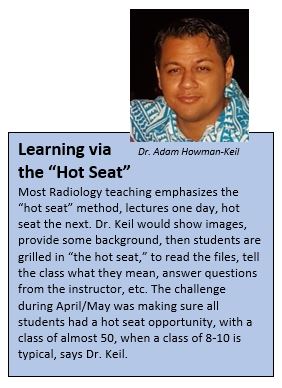 “I was very humbled when Dr. Viali* approached me about teaching the Radiology elective. As a graduate, I was also very proud to teach for OUM which gave me the chance to follow my dream of becoming a Radiologist, in the first place,” says Dr. Keil. “I was confident that teaching Radiology in the non-patient-contact format would be fairly easy to accommodate since general X-ray teaching, apart from a few modalities, is mostly non-patient-contact, anyway.”

Despite not having a great deal of time to launch the four-week elective, which began the week of 27 April, Dr. Keil says he was comfortable with the course content, a combination of readings, lectures, “hot seat” sessions, and exams.

“We covered the majority of important things that most first-year graduates encounter, based on my own experience as an intern straight out of OUM and seeing what is needed most at a clinical level,” says Dr. Keil, noting that the course focused on clinically relevant imaging. He went on to say that high-end specialities such as MRI were not emphasized since most early graduates will not be interpreting those images. Other modalities such as ultrasound sonography and CT were touched upon, regarding when and why patients should be referred for them.

Dr. Keil’s primary challenge was the size of the class. There were 49 students in the inaugural Radiology elective.

“In my own Radiology training, as well as teaching medical students and interns at TTM Hospital, average numbers were usually eight to ten students per class. This is specifically done since most Radiology teaching places emphasis on ‘hot seat’ sessions,” says Dr. Keil (see insert). “With eight students, for example, sometimes every student could get a turn during a single session. The large class was a challenge since we could only do a few students during each of the live classes,” he says, adding that he was thankful to have gotten most, if not all, students a hot seat session.

Other challenges included managing a class with many different levels of Radiology experience, student availability for lectures, and Internet stability, says Dr. Keil.

“There were some students who had Internet issues, as did I, especially when I was conducting lectures from Savaii island while I was working fulltime. But in the end, the course went well,” he says.

Dr. Keil adds that he would be glad to teach the elective again, hopefully with a colleague, especially if the class is again so large.

“A second instructor would definitely be helpful. We could take the existing curriculum/lectures and refine them further. It is always good to have other teaching styles and another pair of Radiology eyes to make sure we don’t miss anything,” says Dr. Keil.

Plans are already being made for the second offering of Radiology in late 2020 or early 2021, and a colleague will join Dr. Keil to co-teach the course, according to Dr. Brown.

Next: Pathology, the first week of June

Like Dr. Keil, instructors for the Pathology elective, Pranav Dorwal, MBBS and Sudha Shivaraj, MD were both pleased to be asked and excited to teach the new rotation. 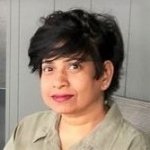 “I love to teach and have always loved Pathology,” says Dr. Dorwal. “I also saw this as an opportunity to help students during the current difficult circumstances, so as soon as I was approached, my answer was, Yes!”

“I am passionate about Pathology, but teaching has always been my first love, so I was also excited when Dr. Diamante** asked if I was interested,” says Dr. Shivaraj. “Once I agreed and began working on the lectures, my initial excitement gave way to apprehension when I realized we were creating a completely new course from scratch within a limited time frame.”

During the short time Drs. Shivaraj and Dorwal had to develop the Pathology curriculum, they decided to capitalize on each other’s areas of specialization. Dr. Dorwal would focus on Hematology and Clinical Pathology, while Dr. Shivaraj would cover Systemic Pathology. 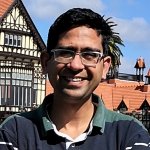 Together, they wanted to make sure that students understood the practical working of a Pathology laboratory, the complexities and steps involved in generating lab results and in interpreting those findings. In addition, they would cover the pathologic basis of commonly encountered clinical conditions and how to correlate this knowledge with practical bedside observation.

“Dr. Dorwal is a wonderful person and we made a good team,” says Dr. Shivaraj, sharing that one of the best parts for them was the freedom and encouragement they received from faculty leadership to design and deliver the curriculum per their collective experiences. Returning the compliment, Dr. Dorwal added, “Dr. Shivaraj is an amazing person and a wonderful team player. Working with her was a pleasure.”

Adding to their challenge and resulting accomplishment was overcoming the logistics of Dr. Shivaraj living in India and Dr. Dorwal in Australia. Finding a time when faculty and OUM students throughout North America and Australasia were in their waking hours was an additional hurdle.

Both faculty members said the feedback they have received from students has been positive, citing emails which said they found the course very useful.

“We had an amazing group of 38 students who were very eager and keen to learn,” says Dr. Dorwal. “And when students are enthusiastic, it helps the entire process of teaching and learning. Their participation and willingness to learn made our jobs even easier. I would love to teach the elective again,” he adds.

Dr. Shivaraj also says that COVID or no COVID, she would love to teach this elective again – because it is valuable knowledge for students. “Pathology remains an important core discipline and it is extremely important for the students to have a strong foundation in Pathology before they step into the clinical field,” she says.

“Thanks to Drs. Keil, Shivaraj, and Dorwal, the success of both electives has earned them a permanent place in OUM’s clinical course offerings,” says Dr. Brown. “We will refine and improve them as they are offered post-COVID.”