You know the story. Proctortrack, the company OUM used for several years to monitor exams, was hacked, so it immediately ceased operations on 15 October. Zero warning. OUM’s SBM students had an exam in two days, which was delayed along with such on-demand assessments as the Final Clinical Exam, End-of-Rotation exams, In-House exam, and even the start of Term 2006.

Less than a week later, OUM was set up and running with a previous provider, RPNow, which had been phased out in late 2016 when Proctortrack was adopted. As you also know, the RPNow transition was a disaster.

“RPNow was an unfortunate misstep. The system was not as user-friendly as we would have liked,” says Greg Beber, OUM’s Chief Information Officer. “But the real deal killer was their abysmal customer support when our students had an issue.”

He explained that since the University had a previous relationship with RPNow, then called Software Secure, OUM had every reason to think the transition would go well, especially considering they were willing to help get us up and running so quickly. But the service simply did not support student needs, Beber says. 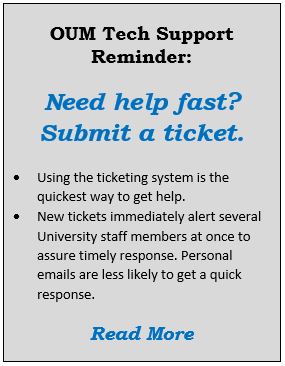 “We know what a disruptive nightmare this was for students and thank them for understanding that the situation was outside our control.” Beber also commends students for feedback provided through questionnaires they completed throughout the vetting and testing process.

Fortunately, within days, OUM had secured Respondus Monitor to manage exam proctoring. The University already had been shopping around for options.

Already on our radar

Even before the hack, OUM had become concerned that Proctortrack was showing its age, and the quality of its support was declining. There were increasing issues with Proctortrack’s functionality, and it didn’t seem that adequate resources were being allocated to maintaining and updating the product. Students were experiencing extended wait times when accessing support services, and in some instances, students encountered reps who had not been appropriately trained to resolve problems, says Beber.

“We had been discussing the possibility of making a change before, as things continued to deteriorate,” he says. “The announcement of the hacking issue and ceasing operations with no notice really just tipped the scales and forced us to act on an expedited timeframe.”

He adds that OUM had also been asking Proctortrack for a long time to include a lockdown feature to disable a user’s ability to access other websites during an exam. Taking away the temptation to check other information sources may have helped to deter students who were expelled during the last couple of years. OUM has a Zero-Tolerance cheating policy.

Respondus Monitor locks the student’s browser and desktop and disables everything on a user’s device other than the assessment being completed. The advantage is in the program’s simplicity, says Beber. “The integration with Moodle is really elegantly done. It is a fairly bullet-proof piece of software. It seems Respondus has put a lot of effort into limiting the ability of students to go astray while attempting to access their exams. While Respondus Monitor has no live telephone support, when used correctly very little support should be needed,” says Beber.

Live support is strictly via chat, and Respondus staff members do respond quickly to chat requests, though their support is mainly limited to directing customers to existing troubleshooting resources, primarily dealing with microphone and webcam issues.

The University will continue to keep an eye on the remote proctoring environment to ensure that our students are using the most effective service, says Beber.

“Right now, we feel Respondus Monitor is the best choice for OUM, and we certainly don’t want to make another change, absent compelling reasons. But we are always open to evaluating better products, should they emerge. The important thing to note is that we fully understand the need for stability in this area, and that major changes are not undertaken lightly. They are done only when we feel it is in the best long-term interests of OUM and its students.”