An unusual journey to medical school

Second-year student Natalie Burkhardt from Cooper’s Beach, New Zealand, has an atypical professional background that expands many areas within healthcare, beginning with work as a registered nurse. The one constant in her unique journey is Natalie’s resilience.

“Oddly enough, I hated school as a kid and I wasn’t very good at it,” Natalie says. “But when recruiters visited our school, nursing attracted my attention.” She applied and was accepted. After graduating from NZ’s Northland Polytechnic, she and a fellow student spent two years working in the UK. 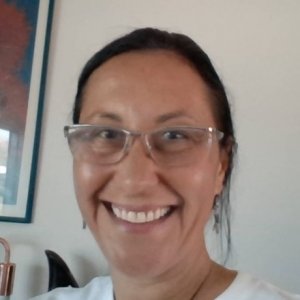 “There I was, a country girl from a small town in New Zealand, in the middle of London when I was in my early 20s,” says Natalie, shaking her head with a smile.

The ER started her thinking

After returning to NZ, she was working in emergency medicine when she had her first thought about studying medicine.

“I loved the ER,” says Natalie. “I loved the pace and the way you had to always be ‘thinking on your feet.’” But she didn’t act on that interest. Not yet.

At the time, Natalie was a swimmer and triathlete. For a number of years, she held the New Zealand record in the 800m freestyle, also representing her country as a triathlete in two World Championships. While she had notable success as a competitive athlete, she also had challenges and some inconsistencies, especially with swimming.

“For a number of years, my performance would vary from breaking a record in one race to coming in last during the next,” says Natalie. Sometimes she was extremely exhausted and unusually out of breath for someone at her level of competition.

She was about 22 years old when teammates teased her about her heart giving out one day. At the time, Natalie was dating a GP who upon hearing the comment, grabbed her wrist in jest to take her pulse, saying he doubted it was giving out anytime soon. But to his surprise, and Natalie’s, he noticed an irregular heartbeat. After an EKG, Natalie was diagnosed with atrial fibrillation. The years that followed included a number of medications, pulmonary vein isolation, and two ablations. But that wasn’t her only health scare.

Natalie had returned to Europe, working in the Netherlands and again training for triathlons, when she was in a serious auto accident which resulted in a broken neck, the inability to walk for several months, and frontal lobe damage. While many of the injuries healed, the head trauma took much longer.  She eventually returned to New Zealand where friends got her working with a neuropsychologist who was very helpful. Exhaustion and getting through the workday continued to be a struggle, but she was still thinking about her next step.

Evidently it wasn’t yet time for medical school because Natalie applied and was accepted into dental school at Otago University in Dunedin, New Zealand. She has owned her own practice since 2009 and continues to work four-and-a-half days each week. She has also been a clinical lecturer at the University of Queensland School of Dentistry.

“I built my entire practice. There was no patient base in the area,” says Natalie. “The closest dentists were 40 miles away in either direction. I bought the land and built the building.” Throughout the years, she liked practicing dentistry, but still thought about medicine. (Natalie shares that she expects to confirm a buyer for her dental practice during the next several weeks.)

A couple of years ago, Natalie was in Samoa for a holiday and ran into a GP whom she had known as a resident at the hospital where she worked in the ER. She is a Samoan who had gone to medical school in New Zealand and returned to her country following postgraduate training.

“She knew that medicine had always been in the back of my mind. She said, ‘You should look into OUM. It’s a good program and its graduates are good doctors.’ So, I began my due diligence,” says Natalie. She attended several Meet the Student sessions and contacted the Medical Council of New Zealand which confirmed that OUM graduates may practice in the country.

Learning from the OUM experience

Now midway through her system-based modules, Natalie says medical school teaches you a lot more than science. She has learned a great deal about herself, how she learns, and her capacity to take on more than she ever expected she could.

“Online education was new to me. I had a lot of angst about it, but the process has flowed quite easily,” she says. “I’ve had very positive experiences from class structure and content to accessibility and openness of professors.”

That accessibility of professors at OUM includes not just course instructors, but also Academic Advisors which students meet with for one hour each week. Natalie says she didn’t get that academic support during dental school.

“You don’t get an Academic Advisor in a traditional setting. That time each week is priceless. They help you balance your time, go over readings, prioritize, whatever you need. They keep you on track,” she says

Natalie has learned a lot about her time management skills.

“I think medical school makes you realize that you have the capacity to do much more than you ever thought you could, even without enough sleep. I am ten times better at managing many balls in the air than I ever expected to be,” she says, adding that together with managing time, it’s also about focus.

Natalie aims for 60 hours of study per week, usually managing 50-55, she says, also stressing the importance of closing the door and staying focused during that time.

“How you use your time is important. You need to make them quality hours, not spending time thinking about a patient at work or dinner plans,” she says. “So, you also need people around you who understand and try not to interrupt.”

Natalie expects to do many of her clinical rotations in Samoa and in India at Christian Medical College in Vellore. But because she plans to take the NZREX (the Medical Council of NZ’s registration exam), apply for post-graduate programs, and eventually practice in New Zealand, she will complete some rotations there, as well.

“I know of three hospitals that are quite accepting of IMGs (international medical graduates) and it is important that they know who you are,” she explains. “You can’t just have good grades on paper. Hospitals need to know that you are reliable, that you are a team player, that you arrive on time, you’re respectful, and you know your stuff. Those things all speak volumes and they will remember you when it’s time for residency.”

Throughout the journey, like many of her classmates, Natalie advocates for the importance of balance.

“I tend to get over focused, so if I don’t take time to exercise, or even take a day off once in a while, my performance suffers,” she says. So, what does a former international triathlete and national record-holding swimmer do for exercise and to keep stress levels in check? At age 52, among other activities, she surfs a few times per week. (Thanks, Natalie, for making the rest of us sound boring.)