It is no secret that students have taken many different paths to medical school at Oceania University of Medicine (OUM).

Alen Rusmir, MBBS, Class of 2015, happened to have already been working as an independent clinician before his acceptance into OUM. He was a podiatrist in Queensland (QLD, AU) with a busy, successful practice, often traveling several times weekly to treat patients in remote areas of the country. But he felt his career wasn’t progressing as he had hoped. He wanted a future with more intellectual challenge. Having worked in multidisciplinary settings throughout the years with medical specialists who had encouraged him to look into medical school, and consulting with a fellow podiatrist who was already an OUM student, he finally applied and was accepted into OUM in late 2010.

Now Dr. Rusmir is a month away from beginning his internship at Mackay Base Hospital, Central Queensland’s major regional hospital. Getting this far has been a long, rewarding journey. 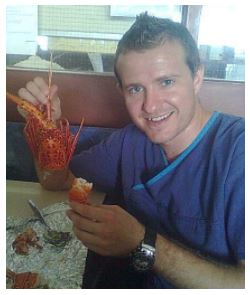 Before their daughter was born, and once he reached the clinical curriculum, Dr. Rusmir and his wife made his rotations an adventure they shared together.

“My wife got to accompany me on many of my rotations so we have fond memories. It really is a journey and we made the most of the hard work,” he says. “The opportunity to experience other cultures will help me to better relate to and understand my patients.”

Dr. Rusmir feels strongly that his time spent in Samoa rotating at TTM Hospital laid a great foundation for his other rotations, for his board exams, and for life now that he has graduated and is about to begin his internship.

“The podiatry colleague who initially got me interested in OUM, also recommended spending as much time as possible in Samoa,” he said. “I spent six months there completing my Internal Medicine, Pediatrics, and Surgery rotations. I saw pathology that I knew I would not see elsewhere and felt very confident as I went on to my other rotations. Dr. Viali Lameko (OUM’s Vice Chancellor) is a great physician and teacher. He is extremely knowledgeable and will push you to excel and attain as much knowledge as possible.”

In addition to completing rotations in Australia, as well as Obstetrics in Nepal where he was able to deliver babies with hospital interns, Dr. Rusmir completed a surgical elective in South Korea with head and neck specialists skilled in robotic-assisted surgery.

After AMC Exam Part 1 then what?

Upon graduating in December of 2015, Dr. Rusmir began preparation for the first Australian Medical Council (AMC) Exam. Not unlike the United States Medical Licensing Exam (USMLE), the AMC system also has two parts: Part 1 a MCQ format and Part 2 an OSCE-type exam with simulated patients in multiple stations. Both parts are taken after medical school is completed and once passed, graduates are eligible for internship positions in Australia.

“I prepared for about three months and took my AMC Part 1 in April 2016,” he says. “It is a gruelling, time-limited exam, but OUM prepares us well.” He explained that all questions must be answered – exams marked incomplete are recorded as “Fail-Insufficient data to obtain result.” Dr. Rusmir passed on his first attempt and says “the one month wait for the result felt like an eternity,”

Individuals who pass AMC Part 1 are eligible to sit for the Part 2 clinical skills (OSCE) exam, however, the exam is only offered to a limited number of applicants. At the time Dr. Rusmir passed Part 1, there were no more spots available through the end of 2016. Sometimes spots open up when an applicant withdraws, but it is common to wait as long as a year to take Part 2.

“Evidently, demand for AMC Part 2 changes each year and it’s typically only offered three or four times during the year,” he says, so he applied for the NZREX as a pathway to provide himself with more internship options. He sat and passed the exam in November 2016 after completing a two week observership at Taranaki Hospital in New Plymouth, NZ.

The fact that OUM graduates are able to practice in New Zealand, as well as Australia, had been a factor in his original decision to apply and attend the University. The former podiatry colleague who had been a few years ahead of him at OUM had secured an internship in New Zealand soon after passing the NZREX, so it seemed like a viable option. By taking the NZREX and not waiting a year for AMC Part 2, Dr. Rusmir also assured that he didn’t lose knowledge. He is a strong advocate for taking licensing examinations as soon as one is able to assure that the OUM material remains fresh.

Sadly, securing an internship in New Zealand didn’t come to fruition as there had been a lot of IMG applications that year. But he also came to learn that passing AMC Part 2 was not necessarily a requirement for all internship programs in Australia.

Ever resourceful, Dr. Rusmir began searching for and applying for Australian internships.

Australian internships: Each State is different

Each State has a different process and its own application portal in which to register and apply for internships, provide required documents, and ultimately be ranked and matched into residencies.

Victoria, for example, requires a separate application for each hospital internship program, which is very time consuming and kept Dr. Rusmir from pursuing the state’s openings. Queensland, South Australia, and Tasmania each have one application and an option to select preferred hospitals, but their criteria for ranking and matching differs from state to state.

“Positions are not easy to come by and as IMGs, you need to be realistic. You may not receive an offer in July (first round match), but if you stay positive and are prepared to go wherever an opening presents itself, then you have an excellent chance of securing a position. I advise students and graduates to persevere. put in the work to clear the AMC Part 1, and make sure you don’t miss the golden month (May window) to apply for match, otherwise you may be waiting another year. ” says Dr. Rusmir.