Student Profile: Feargal Geraghty
Self-motivated? OUM could work for you

Third-year medical student, Feargal Geraghty, has been a sports medicine physical therapy specialist for nearly 15 years. His work has brought him around the world including the UK, the US and his native Ireland. He grew up in an athletic family – one of nine children – and became very interested at an early age in training and treating athletes and their injuries.

He eventually earned an MS degree in Sports and Exercise Medicine from the National University of Ireland which grew into a clinic practice he still acts owns and directs, caring for professional athletes – runners, golfers, and soccer players – in both the UK and Ireland. It should be no surprise that in a recent Meet an OUM Student webinar, his advice to prospective students sounded more like a coach’s pep talk. 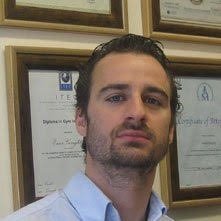 Feargal had been accepted into a traditional medical school in Ireland, but decided to pursue sports medicine and physical therapy. But medical school always remained in the back of his mind. After moving to the states with his wife and young daughter in 2012 – he and his wife now have three daughters – he enrolled at OUM in 2013.

“Becoming a doctor was a natural progression of my career,” says Feargal. Like many OUM students, he wanted to do more for his patients, but he also didn’t want any personal regrets down the line. “I didn’t want to get to the latter end of my career and realize that maybe medicine had been for me.” He is currently nearing the end of his core clinical rotations, about to begin electives, and preparing for residency interviews and the Match in 2018.

In the recent Meet an OUM Student session, Feargal discussed the need to embrace a certain degree of self-learning in order to be prepared in advance for lectures.

“You simply can’t wait to get all your material from lectures. You need to read and prepare for lectures in the same way that instructors prepare,” he says. “Our lectures at OUM are very interactive. You get out of them what you put in. The more prepared you are to interact during lecture discussions with both faculty and students, the more you will learn. You can’t let lectures drive your learning. They are there to support and supplement what you studied in assigned readings.”

Feargal stressed the importance of time management as a medical student and urged everyone to take advantage of all the resources that OUM provides to support each student’s journey.

“The fact that OUM records lectures is a big advantage. While attending live lectures is always best, sometimes you need to fit one in around other responsibilities, which is valuable,” Feargal says.

He also recommends using all of your available time to master material.

“During pre-clinicals, I commuted 45 minutes, each way, to work. I used that time to listen to audio recordings of lectures. I also listened to them and reviewed notes during lunch breaks,” he says.

The need to manage time also extends to home. During pre-clinical study when he was still working 60 hours each week, it was no easy task to also study and find time for family. But for Feargal, there had to be balance. He carved out time every day for his children and his wife.

“It is my belief that sometimes people can want something so bad that they don’t have any balance in their lives.  They put too much emphasis into one particular area. But as doctors, we will always be studying to further educate ourselves in the workforce. So if you are not working, spending time with your family now, and finding the time to exercise, which I do daily, how are you going to be doing it as a busy doctor?”

“My mother is a doctor and a big influence. If I could do half the amount of work that she did for the underprivileged, I would be representing OUM’s charter well. She and my father welcomed foster children into our home, who were often from disadvantaged homes, as well as children with special needs.”

Feargal advises that medical school is absolutely not for someone who wants to get off easy. It is hard work, he says, but it is possible.

“Is OUM right for you? If you are an autonomous self-learner who is motivated to brave electronic interaction, then it is a good fit for you,” says Feargal.

(If you were unable to attend the Meet a Student session with Feargal Geraghty, contact your OUM admissions counselor or the admissions office for an audio link.)