Now nearing the end of his first year in medical school, Preston Harris previously spent three-and-a-half years as an occupational safety technician prior to enrolling at OUM. He had earned his Bachelor’s degree in Environmental Health from East Tennessee State University (US). In addition to advising companies about their workplace safety, one of his responsibilities was taking a company’s injured employees to the hospital, and later their follow up appointments, to assure they got the appropriate care. Being in hospitals with regularity got Preston thinking.

“It reignited my thoughts about medicine. That this is what I would rather be doing than environmental safety. I had thought about being a doctor since I was a child,” says Preston. 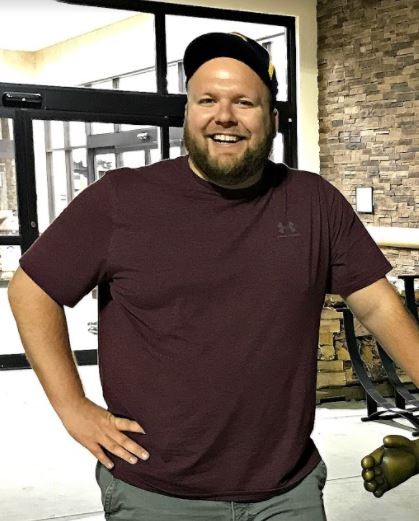 That longing, often postponed by other successful career choices, is common among OUM classmates. Once Preston began looking into schools and researching options, he was certain about moving forward, deciding to “go all in” to pursue medical school.

One of the schools he looked into was OUM. His uncle attended – he is the medical school’s first US graduate – and now practices Emergency Medicine in Florida. Preston says he read everything on the school’s website and learned more from his OUM admissions counselor. He stresses the importance of doing one’s due diligence in selecting a medical school, including licensing requirements in the location where you hope to practice

“I attended a couple Meet the Student sessions and also a sample lecture. In addition, I made sure that I would be able to practice in Tennessee. My ultimate goal is to return to my hometown to practice,” says Preston, who grew up in Dayton, Tennessee.

More US states are now recognizing medical schools with a high percentage of online coursework. When his uncle attended OUM, graduates couldn’t practice in Tennessee, but their regulations have changed. While countries such as Australia and New Zealand have national licensing standards, each individual US state and Canadian province establishes its own licensing requirements.

The result of Preston’s due diligence? He began studies at OUM in January 2017, starting with the two-day in-person New Student Orientation in Houston, Texas. Preston is a strong proponent of attending the face-to-face orientation, if one is able. Students from Australia, New Zealand, and other countries go through orientation and meet their classmates and faculty via Blackboard Collaborate, the same online classrooms where they will attend lectures.

“Having the opportunity to meet staff and faculty in person, those you spoke with during the admissions process and interviews, ‘makes it real.’ And getting to know your classmates in person is one of the best parts of orientation,” he says. “We keep in touch, contact each other to see how things are going, and touch base about class material.”

Preston also notes the value of the team building exercises at orientation and the groundwork laid for how OUM’s curriculum works. He is currently in the Pathology module, sharing that the instructor utilizes a lot of slides and visuals, not that different from lecture halls during undergraduate studies. He also shares the benefits of all four weekly lectures being recorded.

“Lectures being recorded means we can re-listen and revisit. Every morning, I listen to the recording of the previous night’s lecture. It really helps reinforce the material and gives me the chance to take more detailed notes. Then I can also email the professor if I have questions prior to the next lecture,” says Preston, who is also an advocate for OUM’s Academic Advising Program.

While not mandatory, students are encouraged to request an Academic Advisor to guide them through pre-clinical coursework. Clinical Student Advisors are also available and encouraged once students complete pre-clinicals and begin rotations.

“I highly recommend seeking out an Academic Advisor and meeting weekly, as suggested. Mine has been very helpful in helping me better understand what I may have struggled with during the previous week’s exam, sometimes providing me with additional resources to review. She is also there to answer any other OUM questions and helps me chart my course toward graduation and the future,” Preston says. His advisor is psychiatrist Dr. Mari Brodersen who also teaches behavioral medicine at the medical school.

Have he and his classmates encountered any surprises during medical school, thus far?

“While I certainly don’t want to scare anyone considering medical school, some of my classmates have been surprised at how much time it takes to study – and not just study, but to do well. You really need to be committed to study about 50 hours per week and long before you enroll, you need to ask yourself if you’re ready to do that,” says Preston, also noting that OUM has resources available to guide students and strengthen their mastery of material. He uses one called the Structured Study Protocol.

Together with the academic considerations, Preston says it is important to make time for yourself over and above the classwork. He makes sure to do something each weekend to briefly step away – perhaps a movie or a hike – then he gets back to studying.

“You really need to have things to do other than class. I try to get to the gym, keep in touch with friends, play cards, or perhaps go with my extended family to their kids’ ballgames. You have to do something to decompress sometimes and enjoy life. You will be miserable if all you do is study 24/7,” he says.

Preston also stresses the importance of having a financial plan to cover expenses – and a back-up plan if that falls short. Preston saved some money while he was working and then decided to move back in with his parents in order to reduce costs and be able to study full-time.  While this may not be a practical option for students with families and other obligations, all OUM students agree that financial plans must be part of the equation when evaluating OUM. Even though students may work during the two years of pre-clinical studies, many choose to cut back to part-time schedules.

Preston advises prospective students to make sure medical school is the right decision for them – and others:

“You need to be sure that, without a doubt, this is what you want. Because it’s hard. Not just for you, but for the people around you. You must have a support system and realize that you are going to need them. Don’t try to ‘lone wolf it.’ ”