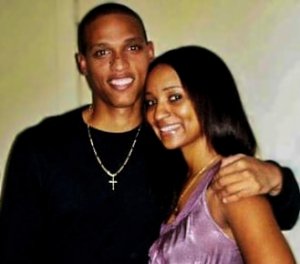 Fast forward a few years to Rustum and Stacey’s meeting during podiatry school at the New Zealand University of Technology in Auckland. It was Rustum’s final year in the program and Stacey’s first year. Today, they are completing clinical rotations in Samoa and have been married for ten years.

While their paths had yet to cross when they were growing up in South Africa, they had both thought about going to medical school when they were young.

“I watched all the medical dramas when I was growing up,” Stacey says of her early interest in medicine. “But in New Zealand, it was a bit easier to get into podiatry school. While we were there, we realized how much we loved working with patients. The end goal was always medical school.”

After completing the program, they moved to Brisbane, Australia, eventually establishing their own podiatry business.

“During that time, our practice focused on biomechanics. We were working very long hours and on weekends,” says Rustum. Those years of long hours, learning to juggle home and work time, helped when they arrived at OUM. “We were already used to balancing,” they say.

Ten years ago, around the time they got married, they began looking into medical schools. They looked at several options but had key considerations they needed to meet.

“We knew we needed to self-fund, so hoped to find a way to continue with our practice,” says Stacey.  It was Rustum who found OUM during an Internet search. 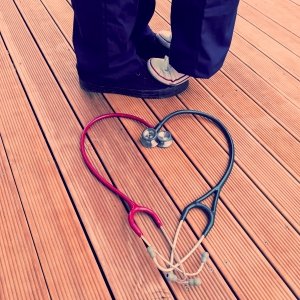 Photo taken by Stacey. “I have always been interested in art and photography. At the time I took the photo, I thought it symbolised the fact that we left our careers as Podiatrists and are moving towards our true passion, which is medicine,” she says.

You can’t fail to plan

He spoke with several OUM students during their due diligence period.

“One told us, ‘If you fail to plan, you plan to fail,’” Rustum says, a statement the couple took very seriously. They spent five years planning for medical school before enrolling at OUM. They found an opportunity that involved flying throughout rural Australia making home visits, often to assess elderly patients, which gave them plenty of time in between trips to manage their studies.

Establishing a support system also needs to be part of the planning process, added the couple.  Stacey says her parents and her brother and sister have been very helpful, as have their friends.

“My family knew that going to medical school was something I always wanted,” says Stacey, who as a podiatrist and soon a physician, is the only member of her family to work in healthcare. “My family said, ‘Don’t you want to have a life?’ Do you really want to go to school again?” says Rustum, with a chuckle in his voice. His mother was a nurse and his uncle was a physician in South Africa, so he had grown up watching them with their patients.

Know what’s important and what works

Like their OUM peers, Stacey and Rustum learned to make the time and to balance the challenges of work.

“Sunday was our time,” says Stacey. “We would get our weekly quizzes out of the way, then relax and have a nice dinner. We also agreed not to talk about work or school during that time,” she says of the Sundays during pre-clinicals.

They also came to realize that they have very different study styles.

“We don’t like to study together,” says Stacey. “We typically study in different rooms. After initially going through new topics, when we know we can discuss and explain them, then we get together.”

They were usually in the same pre-clinical modules together, which extended to doing clinical rotations together.  While they have completed most of their clerkships in Samoa – with only two more core rotations left, then electives – Stacey and Rustum completed their Surgery and OB rotations in Nepal.

“Samoa rotations provide great teaching and hands-on opportunities to learn and perform procedures you may not get to in other countries,” says Rustum.  “You feel very much part of the team in Samoa, able to work with consultants and with local students and those from other schools.”

Support received from other medical students is very important, they say.

“Initially, you think you can do it all, but you really need to have people to debrief with,” adds Stacey, referring to the value of being with those who truly understand the challenges of medical school.

Another fourth-year student with whom Stacey and Rustum have become good friends is Lisa Wallace. While they got to know each other during online lectures, the first time they met in person was especially ironic.

“A couple of years ago, we were on holiday in Bali,” says Stacey. “We noticed through each other’s Facebook posts that Lisa and her husband also were in Bali on holiday.” Since then, the three students have completed rotations together in Samoa, joined by Lisa’s husband.

What a small world indeed.