More than three-quarters of OUM students gave the faculty and administration their input into how the University is running and their suggestions for improvement during the eighth OUM Annual Student Survey, administered in November-December 2018.

“We are absolutely thrilled that so many students took the time to share with us what’s working, what needs improving, and their suggestions for getting there,” says Chris Dudley, Deputy Vice Chancellor for Administration & Student Affairs. “Results were largely positive, and so many students made some great recommendations for how we may improve in the future.”

The 171 responses were representative of the student body in terms of geography and where students are in the program. Forty-seven percent of respondents were in the system-based modules. Nearly half of respondents entered OUM within the last two years.

Every student survey, since the first one in 2011, asked students to rate different aspects across the University on a scale of one (poor) to ten (excellent).  With an eight-year range for overall satisfaction between 6.7 and 7.6, the 2018 overall satisfaction score was 7.2, which is not statistically significant from the earlier scores. Two-thirds of OUM students rated their overall experience as “good” or “excellent.”

Satisfaction with OUM’s library and technical support ranked in the good-to-excellent range, and students provided some insightful, constructive suggestions for improvement.

A key feature of the student survey is the sections where students are asked what they “like most” and “like least” about OUM.

Similar to previous surveys, there was a great deal of similarity among the likes with “flexible” and “flexibility” accounting for half the responses. The word cloud below illustrates the most commonly mentioned words. The larger the word’s image, the more times it was mentioned.

Several students named names of faculty and staff members they appreciate. Those sentiments will be passed along to those who were named.

Dislikes, on the other hand, were as diverse as OUM’s student body. The most commonly mentioned dislike concerned the scarcity of clinical rotation sites in Australia, as mentioned by 36 percent of Aussie students. Australian students were concerned about mini-case content and timing, isolation, exams, lack of support, and uncertainty about their futures.

American students seemed to be more concerned with the quality of teaching and the In-House Exam. Other concerns mentioned by Americans included course exams, responsiveness of administration, financial matters, and mini-case sessions.

“The academic and administrative leaders read all these comments and take action to make the necessary corrections,” says Dudley. “We’re going to investigate the situations that were mentioned and will take a close look at our administrative policies and procedures to be sure that we’re sensitive and responsive to student needs.”

Resulting changes may take many forms. A couple of complaints in the section on mini-cases about the times they were offered resulted in an immediate change to a more convenient time for Australian and New Zealand students.

A significant focus of the 2018 student survey was on the mini-case discussions in the system-based modules, which were launched in 2017. While students had generally good impressions of the mini-cases, as illustrated in the chart below, they did offer solid, constructive advice for improvement. 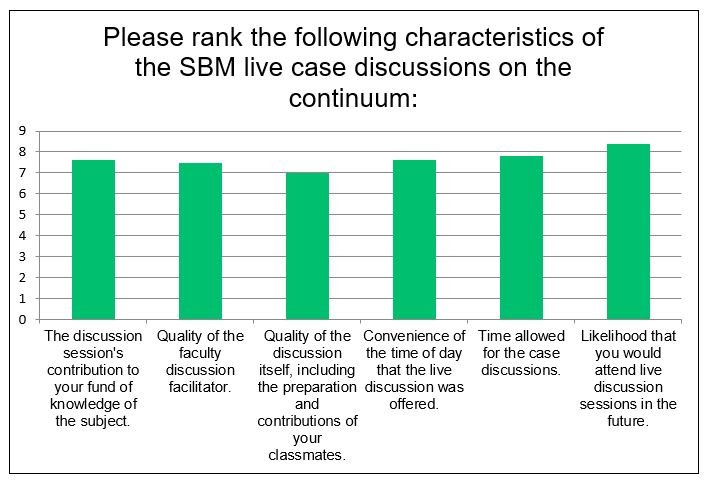 “We have not been satisfied with the mini-case discussions. They need some additional work. The student survey has helped us identify the issues and some solutions for improving them,” says Randell Brown, PhD, Deputy Vice Chancellor.

A question in the survey asking where students are with their research projects confirmed what Dr. Brown and his team have long suspected: Students are behind where they should be. More than 40 percent reported being aware of the requirement but have not yet started their project. Another 33 percent have identified a potential topic but have not taken any further action.

“The research project requirement is real, but it should not be scary,” says Dr. Brown, who also serves as Director of Research. “If you haven’t done so, you’d better contact Dr. Camera or me about your project soon.”

While two-thirds of clinical students taking the survey report using Clinical Student Advisors during their rotations, their experience was uneven. While most reported excellent experiences, others reported problems that include unresponsiveness of advisors or confusion about their duties.

While the most common response to the question about difficulties in clinical rotations was “none,” the most common problems mentioned were related to supervision of the rotations, cost and financial issues, University support, and finding rotations.

With nearly 70 percent of students using Facebook, the University has taken action to improve that experience. Working with OUMSA, a closed Facebook group was started for all students. To join, search “Oceania University of Medicine (OUM) Students” and request membership.

Twenty-eight percent of the students use LinkedIn and Instagram and 11 percent use Twitter.  Twenty-two percent report that they do not use social media at all.

The OUM Annual Student Survey has asked about the performance of the Student Affairs Committee for each of its eight years, to ensure that it is being fair and responsive. Impressions continue to be generally positive, with ratings ranging from 7.5 to 8.2. When asked for suggestions for improvement of the Student Affairs Committee, three-quarters of the 105 respondents to this question reported no issues or suggestions for improvement.

The results of the Annual OUM Student Survey for 2018 are largely positive and consistent with previous years.

By country, Americans and New Zealanders are generally more satisfied than Australians and Canadians.

“Interestingly, students in each country seemed to think that students in another country were receiving preferential treatment,” says Dudley. “However, nothing could be further from reality. Our efforts to customize our offerings to students of different countries may be misconstrued as playing favorites.”

Areas of need identified in the 2018 survey include:

Recommendations to address these concerns and others in the survey include:

“We really appreciate our students’ taking the time to tell us how they feel about their experience,” says Dudley. “And we look forward to hearing, next year, how we’re doing to improve.”

The OUM Student Survey is administered annually in November/December to the entire student body.  While participation is not mandatory, it is highly encouraged.  Participation in early years was 45-50 percent, but it has been above 60 percent the past four years.  In 2018, the participation rate was 76 percent. Results typically are tabulated and analyzed in January.  The University’s Steering Committee, as well as several faculty and administrative committees, have copies of the 68-page report and are incorporating student input and ideas into their plans for the development of future policies and procedures and for University-wide strategic planning.  The detailed results of each survey also are shared with PAASCU, OUM’s accrediting agency.