“There is a concerning shortage of doctors in my home country, especially in specialty care,” says fourth-year medical student, Helena Taeu Masipau, from Samoa. That shortage is a commonly known fact that she is on track to reduce.

A number of motivators brought Helena Taeu Masipau to Oceania University of Medicine. Now a fourth-year medical student in the midst of clinical rotations at Tupua Tamasese Meaole Hospital (TTM), her first introduction to medical school was in 2009 when during her year 13, she attended an OUM Open Day/Open House with others from her school.

While the experience sparked her interest, the thought of medical school seemed extremely daunting, especially at 17-years-old. She opted to earn her Bachelor of Nursing degree at the National University of Samoa (NUS). 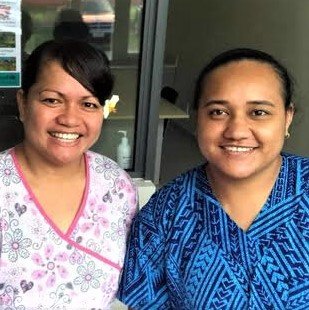 Fast forward a few years to Helena working in TTM’s Emergency Room as a registered nurse: she loved the pace and intensity of the emergency setting. She also liked being part of a team, an especially important aspect of that specialty’s environment. Her years in the ER also raised her awareness of a commonly-known fact regarding healthcare in Samoa – there are not enough doctors.

“There is a concerning shortage of doctors in my home country, especially in specialty care,” says Helena, who continued to work full time in the ER throughout her pre-clinical years at OUM. “I like emergency care a lot, but I had begun to recognize that with more knowledge, I could help so many more people – in the ER and in my community. I have a passion for change,” she says.

As she began to realize how interested she was in learning more, she happened to have a conversation with a nursing colleague who told her she had decided to enroll at OUM. Long story short, Helena decided to apply with her friend, Uila Laifa-Lima, who also worked at TTM.

“We’re partners,” says Helena, adding that they had class together during pre-clinicals, studied together, completed their Internal Medicine Rotation together, and are now in their Surgery rotation.

For most students in OUM’s distance-learning environment, that day-to-day relationship with a fellow student is enviable. About a year into their OUM studies, Uila resigned from TTM and began teaching in the NUS nursing program. But, they continued to study together, Helena says.

Tune out the naysayers

While their commitment to studies and their decision to become physicians may have been strong, they encountered unexpected obstacles from TTM’s nursing staff who understandably favored post-graduate work in nursing as opposed to a medical degree.

“We didn’t have much support from some members of the nursing staff,” says Helena. But she refused to let it discourage her progress. “There were a lot of naysayers, but I learned to turn them into motivation,” she says.

Luckily, Helena had a good deal of support at home from family and friends.

“I am number four of seven children and our dad is a lawyer. He is a constant reminder that learning is a never-ending process and that one should keep striving no matter the challenge. He also taught us that life is about service to others.”

Helena credits her mother for the family’s strength and success.

“She takes care of all of us. She is truly the glue that holds our family together,” she says. While some of her siblings are married, she lives at home with her parents, as does one of her brothers and his young family.

In addition to family, Helena appreciates the support of her close friends.

“They inspire me. They have cheered me on and made me laugh when I needed it most,” she says.

According to OUM faculty, that support is a clear contribution to medical school success.

“Students with good family support are more likely to stay in medical school, not just at OUM, but throughout academic medicine,” says Mari Brodersen, DO, the University’s Associate Director for Student Advising and Clinical Course Director for Psychiatry. “Family support can mean everything to students going through the stresses associated with medical training,” she adds.

Academic challenges and the measles

While Helena knew medical school would be difficult, it turned out to be even more than she expected.

“I knew our studies would be hard, but I didn’t know quite how much challenge it would turn out to be and the level of commitment and dedication it would take. But it’s been a rewarding journey so far,” she says.

Samoa’s tragic measles crisis in late 2019 and early 2020 helped Helena confirm her post-OUM plans. Becoming an emergency physician is her first choice, again referring to the country’s shortage of specialists which became even more apparent while diagnosing and treating measles cases.

“It was a very different experience,” she says of the measles epidemic. “We simply were not used to seeing so many children come into the ER, especially so sick. It was sad. But we did learn a great deal from the doctors and nurses who came from other countries to help.”

Throughout her OUM studies, and especially during the measles crisis, Helena called on her faith to keep her strong and healthy.

“To take care of myself, I make it a point to get enough sleep, stay optimistic, stay organized, and always to rely on faith and prayer,” she says.

She also likes to stay active. She enjoys walking and hiking with friends. Those friends that also make her laugh.

(This profile originally appeared in the February 2021 issue of OUM News.)