After spending 15 years as a naturopath, Satheesh Kumar, MD plans to combine Ayurveda and his OUM medical degree to provide his patients with integrative care.

A couple of years ago, a Reuters.com story said, “Gaining admission to India’s top medical schools is akin to winning the lottery.” It went on to say that All India Institute of Medical Sciences in New Delhi, rated one of the best medical schools in India, typically admits about 70 new students each year – out of  80,000 to 90,000 applicants. 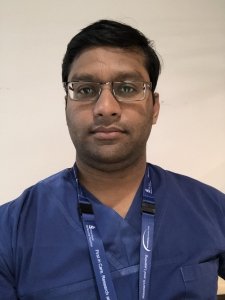 Now a graduate of OUM’s MD program, as a fourth-year medical student last year, Dr. Satheesh Kumar quoted the statistics above at one of the University’s Meet a Student webinars. Years ago, those admissions challenges are what led him to study ayurvedic medicine and earn his BAMS degree (Bachelor of Ayurvedic Medicine and Surgery), as an alternative to attending medical school. One of the oldest forms of medicine in the world, Ayurveda has been practiced in India for 3,000 years.

For nearly 15 years, Satheesh has been a highly successful naturopath (Ayurvedic Medicine practitioner), first in India and eventually in Melbourne, Australia.

“The BAMS is a six-year degree and you study similar subjects – medicine, surgery, pathology, and other basic sciences,” says Kumar. “What makes ayurvedic medicine different from allopathic medicine is its additional focus and training on diet, lifestyle, and traditional herbal medicine, for example.”

He grew up in south India, near the famous temple town of Tirupathi. While his father was a bank manager, he encouraged Kumar to become a doctor. “It was his long-cherished dream for me to become a doctor, a Western doctor,” says Kumar. Though getting into medical school in India was extremely difficult, he was accepted into the BAMS program at NTR University of Health Sciences.

A few months after earning his BAMS, he moved to Melbourne to study for his Master of Public Health (MPH) and Master of Health Promotion (MHP) degrees from Deakin University. Kumar originally thought this would be the beginning of a career in teaching and research. He thought he would continue on with his PhD.

“At least, that was the initial plan when I moved to Australia,” he says. “But things don’t always go as planned. Some destiny is already decided for us, so we need to steer it as it comes.” It was during his public health studies that he had the opportunity to practice Ayurveda in Australia. “Destiny pulled me into clinical practice, which was a blessing and great turning point in my career.” Kumar spent 15 years in clinical practice.

“During the initial days of my career, I used to work for others,” says Kumar, “but I slowly began building my own practice. It eventually grew to four locations and a client base of almost 8,000,” he says. In 2016, after enrolling in medical school, he also ventured into pharmaceuticals, manufacturing TGA-listed (Therapeutic Goods Administration) nutraceuticals and herbal products in Australia.

Despite all the professional success, Kumar says his greatest blessing has been meeting his wife, having two children, and settling down in Australia. His wife had been a dentist and oral pathologist in India but is now a clinical audiologist after earning her second master’s degree in Melbourne.

It never went away

“That dream of becoming a Western doctor, that dream my father and I shared, was always in my subconscious,” says Kumar. It was through the wife of a friend that he learned about OUM. He initially contacted the University in 2014 but spent the next year organizing himself and planning financially to make sure he would be able to achieve his father’s dream. Sadly, Kumar’s father passed away when he was just finishing his pre-clinical study at OUM.

With all his clinical practice success in ayurvedic medicine, why allopathic medicine? “I’m not keen on one or the other. I’m keen on helping people,” Kumar says, explaining that this additional knowledge enables him to provide integrative care.

Kumar also notes that this comprehensive approach is especially necessary as patients have become more health conscious and knowledgeable about medicine, adopting things like organic products and yoga. “Not many people know that yoga is one part of ayurvedic medicine. I do it every morning.”

As he nears the end of his clinical rotations and looks toward graduation, Kumar knows that success could not have happened without the assistance of his family.

“My wife’s support has been enormous. Without her, I would not have been able to do this,” says Kumar. “Life gives challenges, but also gifts, and my best gifts have been my wife and my kids, Vishwak, seven-years-old, and Dhurvanth, who is one-year-old.”

Kumar says his parents guided him to be studious as he was growing up and he was always fascinated by science and medicine, something which obviously remains with him today. There may even be a finite beginning to that dream Kumar and his father shared.

“When I was in year 7, about 12 years old, I won an award at the district level science fair competition. My exhibit was first-aid,” says Kumar. “Since then, my brain has been filled with thoughts of becoming a doctor.”

(This profile originally appeared in the August 2020 issue of OUM News.)